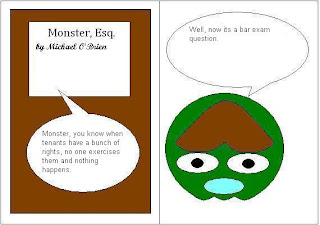 This is the sixth post in my series on the July 2011 California Bar Exam.  If you think that my answers are terrible, let me hear it in the comments.

Question five is a variation on the trespasser question that regularly appears on the California Bar Exam.  I score this question as a change up for two reasons 1) the rules tested are extremely obscure and a wrong turn can easily derail you 2) nothing happens.  Remember the bar exam question where two people owned something, a bunch of stuff happened and it didn't change the parties rights at all?  Well, they're rare, but this is one of them.


Prior to 1975, Andy owned Blackacre in fee simple absolute. In 1975, Andy by written deed conveyed Blackacre to Beth and Chris “jointly with right of survivorship.” The deed provides: “If Blackacre, or any portion of Blackacre, is transferred to a third party, either individually or jointly, by Beth or Chris, Andy shall have the right to immediately re-enter and repossess Blackacre.”

In 1976, without the knowledge of Chris, Beth conveyed her interest in Blackacre to Frank.

In 1977, Beth and Frank died in a car accident. Frank did not leave a will and his only living relative at the time of his death was his cousin Mona.

1. What right, title, or interest in Blackacre, if any, did Andy initially convey to Beth,
Chris, and himself? Discuss.

2. What right, title, or interest in Blackacre, if any, are held by Andy, Chris, and Mona?
Discuss.

The issue is identifying the interest Andy initially conveyed to Beth, Chris and himself. A fee simple subject to a condition subsequent occurs when an owner in fee simple conveys an interest to a person with a condition, if the condition occurs then the original owner may re-enter the property and repossess it. A joint tenancy with right of survivorship exists where an owner in fee simple titles land to more than one person who all share in interest and possession. The right of reentry is not affected by the Rule Against Perpetuities because it will vest, if at all within the life of Beth or Chris since only their action enacts the right of reentry. Here, Andy conveyed Blackacre to “Beth and Chris ‘jointly with right of survivorship’” and retained for himself “the right to immediately re-enter and repossess Blackacre [if] any portion of Blackacre is conveyed to a third party.”

Andy conveyed a joint tenancy subject to a condition subsequent where Beth and Christ are joint tenants and Andy retains a right of re-entry.

The issue is whether Mona inherited Frank’s interest in Blackacre. A joint tenancy is defeasible and can be passed through probate. Here, Mona is Frank’s only living heir and inherits all of his property including his interest in land.

Alternately, Andy's right of reentry can fail as an invalid restraint on alienation.  Whether a restraint will be valid will depend on 1) the estate restrained 2) the kind of restraint and 3) the extent of the restraint.  With regard to the first factor, the estate restrained is a joint tenancy.  Restrictions limiting the power of a joint tenant or tenant in common to seek partition are usually upheld, this factor leans toward acceptance.  With regard to the second factor, the kind of restraint used is a forfeiture because the grantor may terminate the estate upon the occurance of the condition subsequent.  Forfeiture restraints are only invalid where there is a fee involved.  Here there is a fee simple involved, making the restraint automatically invalid.  Finally, the restraint is reasonable in time because the statute of limitations limits Andy's period of recover to three years as noted above. Since there is a forfeiture restraint of a fee simple the interest is invalid and cannot be enforced.

Mona is a tenant in common with Chris, and Andy has nothing.

The issue is whether Chris has obtained title to Blackacre by adverse possession. Adverse possession requires, the open, notorious, hostile, possession of another’s land continuously for the statutory period. Where a cotenant’s ouster is in issue the burden of proof is higher. Chris’s possession was open because he “paid all of the expenses, insurance and taxes” on Blackacre which shows an open possession. Possession was notorious because Chris asserted he “was the sole owner of Blackacre….” Possession was hostile because Chris told Mona to leave and posted “No Trespassing” signs across Blackacre. Jurisdictions range in the period necessary for adverse possession from 10-20 years. Under any of those theories Chris continuously occupied the land for the statutory period.

Alternately, a co-tenant always has a right of partition. Even if Chris has obtained title by adverse possession, he must quiet title in order to enforce his right, before he does this Mona maintains a right to partition the land and obtain a portion of the land or its value at sale.

Additionally, a tenant who ousts another tenant much share rents and profits less taxes paid.  Here it is unclear if Chris obtained any rents and profits while he did pay taxes.  Mona may or may not have a claim depending on Chris's use of Blackacre.

Since Chris has not acted to quiet title and Mona has not requested partition, they are still tenants in common until one of them acts. Andy, as noted above, has nothing.
Posted by Unknown at 9:50 PM