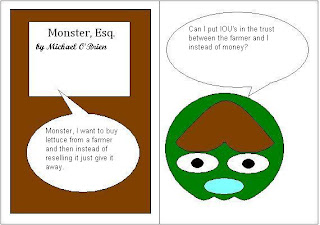 That's a lot of lettuce!  There are two intertwined legal issues: the Uniform Commercial Code (UCC) and the Perishable Agricultural Commodities Act (PACA).  Under PACA, commission merchants, dealers, and brokers hold produce and any receivables from the sale of produce in trust for the benefit of unpaid produce suppliers until full payment has been made to the supplier.  Here, Paul's Pak purchased lettuce from Andrew Smith creating a PACA trust between them.


Church Brothers argues that it entered into a Waiver Agreement with Salvador Tarantino on behalf of both Paul's Pak and Premium Fresh that prevents Paul's Pak from recovering under the Supply Agreement.  Paul's Pak argues that this only relates to the Marketing Agreement.  Andrew Smith argues that by waiving its PACA rights for unpaid produce, Paul's Pak breached the PACA trust between it and Andrew Smith.  The court agreed that not collecting trust assets (by demanding payment of invoices) was a breach of trust.  Andrew Smith then argued that both Church Brothers and True Leaf had knowledge of this breach and that they were liable for the breach of trust as well.  Judge White stated that facts were open on both sides of this issue and that knowledge of breach of trust and the interpretation of the Waiver Agreement were questions of fact for trial.

Premium Fresh has not handled the case well.  It never disclosed a subrogration agreement in discovery, so that has been excluded from evidence.  It claims a failure to mitigate damages in its motion for summary judgment but 1) did not include that in its answer and 2) never answered Paul Pak's Second Amended Counter claim at all.  Judge White granted Paul's Pak Summary Judgment on the 2007 Premium Contract in the amount of $1,620,046.86 as of August 19, 2010 with interest accruing thereafter at the rate of $339.26 per day.

The case of the Missing Lettuce is Andrew Smith Co. v. Paul's Pak No. C 08-4802 and the motions for summary judgment are below the jump.