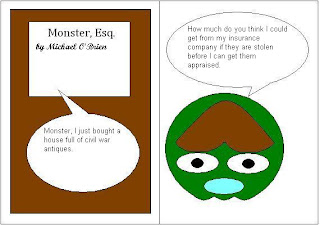 Several Northern California Judges have released orders in mortgage and insurance cases, among them:

Lake v. First National Insurance Co. is an insurance dispute.  James "Bryan" Lake and Terry Hall purchased some property "in pretty bad shape" in Hayward, California which was filled with valuable civil war era antiques previously owned by the home's previous resident Bob Ryan.  Before they could get the antiques appraised burglars stole them and Ms. Hall submitted a personal property insurance claim for $162,736, the policy limit with an itemized list of each piece of property and a statement of what it was worth. After some back and forth the insurance company paid out $25,126.29. The plaintiffs sued for breach of contract stating that it provided adequate information to First National to obtain a larger payout. First National disagreed.

Judge Saundra Brown Armstrong weighed the evidentiary submissions. The plaintiffs submitted the testimony of an appraiser who based his value of the civil war materials on the testimony of Mr. Ryan and his experience in the field. Judge Armstrong cited Triton Energy Corp. v. Square D Co. (9th Cir. 1995) for the proposition that an expert's conclusory testimony cannot defeat a motion for summary judgment. There,


Trinton’s entire case rests precariously on the opinion of its expert, Douglas Bennett, who never examined the allegedly defective circuit breaker. This substantially impaired his ability to express a reliable expert opinion based upon specific facts. Therefore, we find that Bennett’s expert opinion and the inferences Trinton seeks to draw from it are not of sufficient quantum or quality to create genuine issues of material fact.

She granted summary judgment for the insurance company.


First Financial Insurance Co. v. Butler Chamberlain-Nielsen Ranch is an insurance defense case where First Financial (and a dozen others) provided representation for Butler in a construction defect case.  Now First Financial seeks reimbursement of its defense costs and is suing Butler for covering it outside of the scope of the policy. Butler moved to dismiss the case for failure to join every other insurance company involved in the underlying action.  Judge Saundra Brown Armstrong stated that this misses the point:

She denied the motion to dismiss.


In exercising its discretion, the Court must make three separate determinations: (1) whether to allow the dismissal at all; (2) whether the dismissal should be with or without prejudice; and (3) what terms and conditions, if any, should be imposed.

Judge Koh found that dismissal should be granted with prejudice and without condition because Gordon could not adequately explain why it would be prejudiced by dismissing American International.


"Proof of disparate impact is based not on an examination of individual claims, but on a statistical analysis of the class as a whole." Ramirez v. Greenpoint Mortgage Funding, Inc., (N.D. Cal. 2010).

Das v. WMC Mortgage is a foreclosure action where Mr. Das and others claimed they were duped into taking a $975k loan they could not possibly repay and that the Mortgage Electronic Registration Systems, Inc. (MERS) failed to issue a proper foreclosure notice under California Civil Code Section 2923.5. That section provides: "a mortgagee, trustee, beneficiary or authorized agent may not file a notice of default [...] until 30 days after initial contact is made [...] or 30 days after satisfying the due diligence requirements."
MERS argues that this section does not provide a private right of action. California Courts disagree on this point. As best I can tell here is the lay of the land:

It's an open question and I don't want to dismiss claims on this ground:

Judge Patricia Trumball stuck with her decision in Roberts v. JP Morgan Chase Bank, N.A. that it does grant a private right of action and allowed the claim to go into discovery.
Posted by Unknown at 1:28 AM