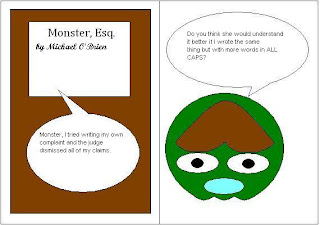 Northern California Courts have recently released a series of opinions on mortgage and contract cases, among them:

Rump v. Philips Lifeline is a breach of contract case resulting from Mr. Rump's resignation as a sales representative on April 11, 2008.  Mr. Rump filed suit in Contra Costa Superior Court on May 11, 2009 alleging that he was not properly compensated while employed by Phillips.  On July 17, 2009, Philips removed the case to federal court.  After that, on June 17, 2010, Mr. Rump amended his complaint to add a count of interference with economic expectations. Philips moved for summary judgment on the new count stating that the two-year statute of limitations for the claim ran in April, 2008 and it should not relate back to the filing of the complaint. Mr. Rump argues that it should relate back because it has to do with the "same transaction or occurance" his employment. Judge Susan Illston disagreed:


[The original seven] claims are all based on defendant’s alleged failure to pay plaintiff the wages and commissions owed to him under his oral employment contract. Plaintiff’s new claim for interference with economic expectations, however, is based on the Non-Solicitation Agreement between plaintiff and defendant. The new cause of action and the original causes of action are therefore based on separate agreements and on different alleged conduct by defendant. Consequently, they amount to separate interactions between the plaintiff and defendant.

She granted summary judgment on this issue for Philips.

Liftech Consultants Inc. v. Samsung Shipbuilding & Heavy Industries Limited is a million dollar contract dispute. In 1990, Samsung entered into a contract with Liftech, which agreed to provide professional engineering services in connection with the design, construction and sale of certain Low Profile Container Cranes. As a part of the agreement, Samsung agreed to pay Liftech's legal fees in a dispute with a third party. These cranes were installed by the Port Everglades Authority in Broward County, Florida and they failed after Hurricane Wilma. Liftech mediated the dispute with Broward County and sued Samsung for indenification of the costs in mediation.  Judge Saundra Brown Armstrong quickly distilled the issue in the case "whether defense costs for 'litigation' extends to costs incurred as a result of mediation, as opposed to a lawsuit."   She found it did not, stating that she could not ignore the agreement's reference to litigation which cannot include a claim before a lawsuit is initiated.  Judge Armstrong dismissed the case with prejudice.

Dancy v. Auora Loan Services is a foreclosure action where Auora had a deed of trust on Mr. Dancy's Property in Langunitas, California. The Deed of Trust identifies First Trustee Services, Inc., as the “Trustee,” while Mortgage Electronic Registration Systems, Inc. (“MERS”) is specified as both the “nominee” of the Lender as well as the “beneficiary under this Security Instrument.” After MERS foreclosed it attempted to evict Mr. Dancy in an unlawful detainer proceeding and a series of appeals. Judge Saundra Brown Armstrong explains:


No particular causes of action are alleged in the Complaint, though it appears that Plaintiff’s claim is predicated on the theory of wrongful foreclosure.

Mr. Dancy appears to claim that MERS has no interest in the note and therefore cannot foreclose upon it.  Judge Armstrong disagreed, stating that MERS retained its interest in the deed of trust even if the original lender sold (and resold) the mortgage.  She dismissed the complaint with leave to amend.

Powell v. GMAC is a mortgage default case where Mr. Powell argues he received a predatory loan in violation of the Truth in Lending Act (TILA) and related state laws.  Previously, Judge Jeremy Fogel dismissed the case.  Now it has been reassigned to Judge Lucy H. Koh, who echoes Judge Fogel speculation about the existence of a valid claim.


In his FAC, Plaintiff has, for the most part, taken the claims previously rejected by Judge Fogel and re-asserted them against GMAC.  Judge Fogel previously ruled that “the Court has grave reservations as to whether Plaintiff can state viable claims for relief against GMAC.  Among other things, Plaintiff has not alleged an ability to tender [and] many of Plaintiff’s claims appear to be time-barred....” [R]ather than addressing these specified shortcomings, Plaintiff’s FAC appears to ignore them.

She dismissed the claims with prejudice.
Posted by Unknown at 11:06 PM