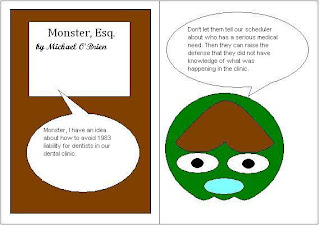 Longmire v. City and County of Oakland is a civil rights action.  Plaintiff Derwin Longmire, a Sergeant with the City of Oakland Police Department, was assigned to the homicide division in 2007 when he was accused by other officers of interfering with the police department’s criminal investigation into the Black Muslim Bakery. Members of the Bakery had been suspected of being involved in two homicides, a kidnapping, a robbery, torture, and a shooting. In April 2008, Internal Affairs began investigation of Plaintiff based on allegations that he had compromised the Chauncey Bailey homicide investigation in August 2007 because of his perceived religion and association with the Bakery.  Presently, the Court is considering the defendant's motion to dismiss.

Sergeant Longmire raises two claims under 42 U.S.C. Section 1983.  First, he states that he responded to the internal affairs investigation and as a result was retaliated against and placed on administrative leave in violation of his First Amendment Free Speech rights.  Second, he argues that his coworkers leaked confidential information about him to the press and this compromised his Fourth Amendment right to privacy.  Judge Jeffery S. White stated that both of these were valid claims that could survive a motion to dismiss.

Chavez v. Curry is a petition for habeas corpus where Judge Phyllis J. Hamilton asked the parties to brief the impact of Hayward v. Marshall (9th Cir. 2010) in a similar manner to other cases this blog has discussed here.  As this blog has previously noted, a prisoner can be denied parole if the Board of Parole Hearings (BPH) or governor finds "some evidence of dangerousness" if there is no finding then under Haggard v. Curry (9th Cir. 2010) the case is remanded to BPH to make a finding - the District Court cannot compel the warden to release the prisoner on parole.  Mr. Chavez killed a sex partner by strangling her in 1993 he pleaded nolo contendre to second degree murder and was sentenced to 15 years to life.  The parole board denied him parole stating the brutal nature of the offense coupled with a psychological assessment from 2006 is "some evidence of dangerousness" necessary to show that Mr. Chavez cannot be released. Mr. Chavez now raises a novel argument - the police report upon which the parole board relied is unreliable.  Judge Hamilton explained that the U.S. Supreme Court has not yet ruled on whether there is a due process right to evidence with "some indicia of reliability" at a parole hearing, accordingly, it cannot be the basis for relief.  She denied the petition but granted a certificate of appealability.

Pizana v. Grounds is very similar to Chavez except that it involves a petitioner who plead guilty to armed robbery and kidnapping receiving an indefinite life sentence with a possibility for parole in 1993.  Judge Phyllis J. Hamilton used  substantial portions of her opinion in Chavez, but explained the contours of Hayward a bit more:


The  [In re] Lawrence, [(Cal. 2008)] standard requires more than this to support a finding of current dangerousness, however: "'something in the prisoner’s pre- or post-incarceration history, or his or her current demeanor and mental state, indicat[ing] that the implications regarding the prisoner’s dangerousness that derive from his or her commission of the commitment offense remain probative to the statutory determination of a continuing threat to public safety.'" Cooke [v. Solis, (9th Cir. 2010) (quoting Lawrence). Here, that “something” was that (1) some of petitioner’s testimony before the Board was evasive, suggesting that he had not come to terms with his offense; (2) he had not learned a vocation, only working as a washing machine operator in the laundry; (3) he had not learned the twelve steps of Alcoholics Anonymous despite having attending meetings for years,id. at 34-35; (4) he had a disciplinary notation from 2002 for stealing, which suggests he has not decided to conform his conduct to the law; and (5) the psychological report was distinctly negative, the psychologist pointing out petitioner’s minimization of his crime and predicting that he would backslide if released.


Judge Hamilton denied the petition for habeas corpus and did not issue a certificate of appealability.

Curry v. Jones is a pro se prisoner civil rights suit for cruel and inhumane treatment in violation of the Eighth Amendment and actionable under 42 U.S.C. Section 1983.  Mr. Curry claims that a broken tooth caused him pain from March 29, 2006 until May 16, 2006 when a prison dentist extracted it.  Dr. Jones admitted an abscessed tooth was a serious medical need, but defended by stating that he had no idea what was going on in his dental office and that he did not intend to allow the plaintiff to suffer with a toothache for six weeks.  Mr. Curry thought this explanation was not enough to prevent him from succeeding on his claims and moved for summary judgment.  Judge Marilyn Hall Patel denied the motion but admitted this was a close call.


Due to the volume of requests being reviewed as well as the division of labor in the dental department, a reasonable jury might conclude that Dr. Jones did not know of and disregard a need for dental care. This is a close call, however, because defendants presented no evidence as to whether or how requests were prioritized. It is not clear whether it was a poorly designed system or whether it was a poor presentation to the court, but the opposition papers leave the reader guessing as to what the point was of Dr. Jones reviewing the requests if someone else did the scheduling and he gave no directions with regard to that scheduling.

She directed the case to mediation with Magistrate Judge Vardas.
Posted by Unknown at 11:00 PM