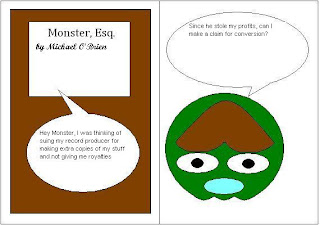 Here are some other cases that have come out of the U.S. District Court for the Northern District of California.

Houston v. Ferguson is a copyright infringement lawsuit where the 1970's punk rock band "The Avengers" sued David Ferguson through his companies Go! Records and CD Presents for selling it's Pink Album without paying it royalties. Presently, Judge Jeffery S. White is considering Mr. Ferguson's motion to dismiss a few of The Avengers' claims.  In particular, the Avengers sue for conversion of there money Mr. Ferguson collected from exploiting their copyrighted works they identify the cost of one such transaction.  Judge Jeffery S. White was not impressed with this legal theory:


If identifying an estimated amount of alleged damages was sufficient, then every disputed claim involving money, including a breach of contract, could be recast as a claim for conversion. That is not the law. See, e.g.,  Farmers Insurance Exchange [v. Zerin (Cal. App. 1997)]. To be sufficiently identifiable, a sum must be more than just damages from a disputed cause of action.  Baxter [v. King (Cal. 1927)]. Thus, Plaintiffs have not sufficiently identified a sum of money capable of being converted.

He granted the motion to dismiss on the conversion claim with leave to amend.

Kennedy Funding Inc. v. Chapman is a rather complex civil action related to a real estate development project.  At issue here are the counter-claims of defendant Newport Avalon Investors, LLC (Newport) against plaintiff and counter-defendant Kennedy Funding, Inc. (Kennedy).  Newport claims that Kennedy changed the terms of the loan on the eve of closing and charges a substantially higher bond premium than the parties initially negotiated through mail and wires.  This, Newport alleges, makes Kennedy a Racketeer Influenced Corrupt Organization (RICO).  Judge Richard Seeborg didn't buy it.  He stated that under Fed. R. Civ. P. 9(b), fraud needed to be pleaded with particularity and that it is not clear who made the misrepresentations to who and when these events occurred. He dismissed the claim with leave to amend.

Tyco Thermal Controls v. Rowe Industries is a case involving the cleanup of of real property located at 2201 Bay Road in Redwood City, California. Tyco is suing Rowe under the Resource Conservation and Recovery Act (RCRA) alleging that Rowe is responsible for PCB contamination at the site. Rowe has moved to dismiss citing  Express Car Wash Corp. v. Irinaga Bros., Inc.(D. Ore. 1997) for the proposition that that RCRA permits an injunction requiring another party to pay post-filing cleanup costs only if remediation efforts were not substantially in place at the time the suit was filed. Here, Tyco has submitted a plan approved by the California Regional Water Quality Control Board. Tyco agrees but argues that since the EPA has not yet approved the remediation plan, there is no plan in place. Judge Jeremy Fogel agreed and stated:


The USEPA has exclusive authority to approve remedial action plans when a risk-based cleanup of PCB’s is elected. Pursuant to that authority, the USEPA has the power not only to adopt the remediation plan approved by the [California Regional Water Quality Control Board] but also to reject it or order that it be modified. Until the USEPA makes its decision, it would be premature for this Court to dismiss the instant action on the basis asserted by Rowe.

He denied the motion to dismiss without prejudice.

Wolfram v. Astrue is a request for attorneys' fees in a successful social security benefits action under Gisbrecht v. Barnhart (U.S. 2002) and 42 U.S.C. Section 406(b). Neither party opposed the motion. Judge William H. Alsup ordered the Commissioner of Social Security to pay the attorney $25,000 from the claimant's past due benefits and to have the attorney reimburse his client the Equal Access to Justice fees he had previously obtained.

Young v. Facebook involves a woman who wanted to be everyone's friend on Facebook.  After receiving a large number of denials of friend requests, Facebook disabled her account.  When she could not reach a person at the company to discuss the matter she drove from Maryland to California where a receptionist told her that she could fill out a contract request form.  As a result of the form, Facebook revived her account but cautioned her against requesting to add friends she did not know.  She then filed a pro se lawsuit against the company alleging that it failed to accommodate her bipolar disorder and was violating her equal protection rights which are actionable under 42 U.S.C. Section 1983.  Judge Jeremy Fogel dismissed the action without prejudice but noted in a footnote that Ms. Young's complaints sounded like a complaint for discrimination under the Americans with Disabilities Act (ADA):


The basis of Young’s Fourteenth Amendment claim appears to be that she has been
deprived of equal protection because she suffers from bi-polar disorder and Facebook failed to accommodate her need for human interaction in the process of disabling her account. While this claim could have been asserted under the Americans with Disabilities Act (ADA), Young does not allege a claim for relief under the ADA. In the “Factual History” section of the complaint, Young does state that “Facebook has failed to comply” with Title III of the ADA[...] but she makes no reference to the ADA in her claims for relief[.]