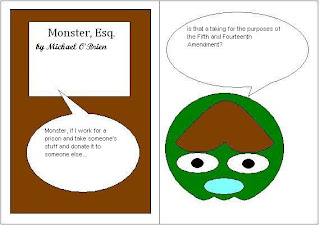 A few judges in the Northern District of California have recently ruled on civil rights cases.  Among them:

Buza v. California Department of Corrections and Rehabilitation (CDCR) involves a former (I think) inmate who was previously incarcerated at San Quentin State Prison.  When prisoners first arrive at the prison all of their personal items are collected.  For five dollars the belongings may be sent to any address otherwise they are placed in a bin and "donated" to some unmentioned charity or cause.  Mr. Buza had no address to send his things and they were "donated."  He claims this violates his Fourth, Fifth and Fourteenth Amendment rights in violation of 42 U.S.C. Section 1983.  The U.S. Marshall Service served CDCR, who never appeared in the case, now Mr. Buza moves for a default judgment.  Judge Lucy H. Koh explained that CDCR is a state agency which has immunity under the Eleventh Amendment from suit.  She dismissed the case against CDCR with prejudice, but noted Mr. Buza could still seek help from the pro se legal office in pursuing his claims.

In Burnett v. Santa Clara, the plaintiff sues over the defendant's confiscation and destruction of his high value Olympic Arms rifle.  Mr. Burnett had previously tried to assert his claims against the city and individuals in state court.  Judge Lucy H. Koh stated that under the Rooker-Feldman Doctrine federal courts cannot act as courts of appeal for state court decisions.  She granted the city's motion to dismiss.

Valdez v. San Jose has the potential to be an interesting case, so this blog is flagging it now while its still in the discovery stages.  As Judge Ronald M. White explains:


Plaintiffs have asserted claims pursuant to Monell v. Dep’t of Soc. Services of the City of New York, (U.S. 1978), alleging in part that the City of San Jose has a practice of enforcing [Cal. Penal Code] §647(f) in an unconstitutional and discriminatory manner that has led to the wrongful arrest of a disproportionate number of members of racial minorities.

The present issue whether the city needs to disclose all arrest reports involving §647(f) for the purpose of determining commonality for class certification.  Judge White agreed that it was, but, for the purpose of expediency, the city only needed to turnover a sample of 20% of the unredacted reports.
Posted by Unknown at 3:28 PM