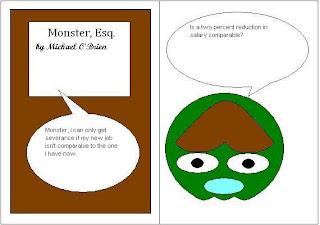 Several judges in the U.S. District Court for the Northern District of California have recently released orders in labor and employment cases, among them:

In Berry v. California Department of Industrial Relations (CDIR), Sarah Berry is pursuing a Title VII action against her employer pro se.  Most of her allegations failed for lack of specificity.  However, she also raised a complaint under NLRB v. Weingarten (U.S. 1975) for lack of union representation at investigatory interviews by employers.  However, as CDIR notes, Weingarten only applies to the National Labor Relations Act, and not to state employers.  Magistrate Bernard Zimmerman dismissed the complaint with leave to amend.

Biba v. Wells Fargo & Co. is a claim for severance benefits under the Employee Retirement Income Security Act of 1974 (ERISA).  Ms. Biba worked for the Greater Bay Bancorp which had a severance plan in place in the event the company was acquired by another.  Wells Fargo merged with GBB and provided one or two positions to Ms. Biba, both of which she rejected.  In February 2008, Wells Fargo terminated Ms. Biba for cause.  Magistrate Maria-Elena James explained that the position provided to Ms. Biba was comparable to the one she previously had (though the salary was less) and that Wells Fargo met its obligations under the plan.  She granted summary judgment for the defendant.

Shek v. California Nurses Association appears to be a breach of union representation claim under the Labor Management Relations Act (LMRA).  On August 22, 2008 Alta Bates Summit Medical Center suspended the plaintiff for, " intimidating behavior toward a co-worker and management, insubordinate behavior, falsifying a time card, and sleeping on the job." A later Board of Adjustment hearing found, "plaintiff did not cheat on his time card and that the sleeping- on-the job claim was not warranted." Nonetheless, the union refused to arbitrate the claim stating Mr. Shek filed it before Alta Bates ratified the union contract. Mr. Shek sued the union, but failed on a motion to dismiss because his claims were either time-barred or preempted by LMRA. Now, he tries again, Judge Phyllis Hamilton explains:


Plaintiff in this case brings the same claim (breach of the duty of fair representation) against the same party (the Union) seeking the same relief (damages and reinstatement) as he did in the first case. The decision in the first case – in which the court dismissed the complaint for failure to state a claim because plaintiff’s claims were time-barred – was a final judgment on the merits. Accordingly, the present action must be dismissed.

She dismissed the case with prejudice.
Posted by Unknown at 5:32 PM