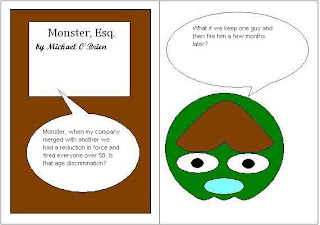 Mr. Melio explains his decision in this manner:


First, I believe [Bloom] witnessed and identified collusion and did not report it. Second, I believe he misused his relationships with financial advisers to what appears to be manipulate [sic] a bid process inappropriately. Three, he had a lack of appreciation for the fiduciary relationship that the financial advisor has with the client. And, four, he took a very active role — appears to have taken a very active role as a banker in trying to circumvent bid processes.

Judge Alsup noted that legally this was a straightforward matter:


Bloom has made out a prima facie case of age discrimination. Defendants concede this much. [Y]et, defendants have articulated a legitimate, nondiscriminatory reason for terminating Bloom[.] Plaintiff concedes the same.

The entire dispute is whether the reason articulated by the defendants was a pretext for unlawful discrimination.  Here Judge Alsup found that a jury could assess the credibility of witnesses and find for one side or the other:


A jury could reasonably believe that Melio contacted Reilly in the summer of 2008 with an intention of replacing Bloom, and that Maloney contacted Reilly prior to Bloom’s termination in order to be ready to start the interview process for Reilly as soon as Bloom was gone. A jury could disbelieve defendants’ characterization of Bloom’s “promotion” to deputy head of the health-care group and find it to really be an effort to marginalize his position within the group. These issues involve credibility determinations that are for the jury to make.