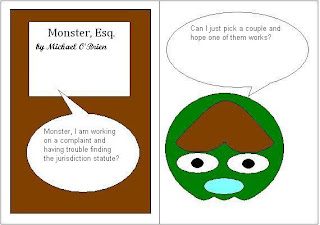 Here are some of the other orders recently released by the U.S. District Court for the Northern District of California.

Von Haar v. Mountain View is a civil rights action under 42 U.S.C. § 1983 where the plaintiff claims two police officer broke her arm and refused to give her medical attention.  Judge Lucy H. Koh dismissed Ms. Von Haar's 1983 claim against the city under Monell v. New York City Department of Social Services (U.S. 1978) for failing to explain the unconstitutional policy that lead to her abuse.  As this blog noted before, there are a number of ways to do this.  Ms. Von Haar's California Tort Claims Act claims were dismissed for failure to cite a statutory or common law basis for the complaint.  This blog has previously pointed out a few ways plaintiffs have done this, such as Cal. Civ. Code Section 52.1.

Fayad v. Siciliano involves an immigrant seeking naturalization.  U.S. Customs and Immigration Services (USCIS) denied the request stating that the petitioner needed to be a lawful permanent resident for three years and he only had LPR status for two years.  Mr. Fayad, interestingly, seeks review under either the Declaratory Judgment Act or the Administrative Procedures Act.  Judge Lucy H. Koh granted the USCIS motion to dismiss with leave to amend stating that jurisdiction is granted by 8 U.S.C. § 142 not either of the other statutes.

Tracfone Wireless v. AU Optronics Corp. is a piece of a massive class action antitrust case.  Presntly Tracfone has filed a motion to serve a foreign defendant, Chunghwa Picture Tubes Ltd. (Chunghwa), through its U.S. counsel pursuant to Federal Rule of Civil Procedure 4(f)(3). This case is similar to Nuance Communication v. Abbyy Software House that this blog covered on Monday.  Both cases deal with the procedures for serving foreign defendants whose nations are not subject to the Hague Convention on Service Abroad of Judicial and Extrajudicial Documents. Tracfone claims that service by letters rogatory through the U.S. Department of State would cost it nearly $10,000.  Instead it seeks permission to simply serve Chunghwa's American counsel in English.  Like the Federal Circuit in Nuance Communication Judge Susan Illston cited Rio Properties, Inc. v. Rio Intern. Interlink (9th Cir. 2002) ("service of process under Rule 4(f)(3) is neither a ‘last resort’ nor ‘extraordinary relief.’ It is merely one means among several which enables service of process on an international defendant.") She sympathized with Tracphone.


Plaintiff has shown that service by letters rogatory is more expensive and time-consuming than serving defendant’s counsel.

She granted the motion to serve local counsel.
Posted by Unknown at 9:23 PM