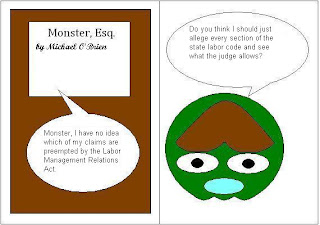 Several judges on the U.S. District Court for the Northern District of California have recently released decisions on labor cases among them:

Carr v. Allied Waste Systems of Alameda County is a dispute over how Allied and the Teamsters Union Local No. 7 handled Mr. Carr's grievance.  On April 8, 2009 Mr. Carr refused to drive his refuse truck after noticing a minor mechanical problem.  He wanted either the problem fixed or a new truck.  HIs supervisor told him to drive, he refused and Allied fired him subject to the review procedure in the Union's collective bargaining agreement (CBA).  Two different committees review suspensions and terminations of employees covered by the CBA, if deadlocked (as was the case here) the parties submit the matter to arbitration.  The arbitrator noted that Mr. Carr had worked for Allied for 15 years and was familiar with the "work now and grieve later" policy in place and that refusing to work would be insubordination and grounds for termination.  Mr. Carr, proceeding pro se invokes nineteen causes of action which are mostly state law breaches and one count of a violation of the Labor Management Relations Act (LMRA).   Judge Phyllis J. Hamilton had a hard time figuring out precisely what is being alleged.

Committee for Recognition of Nursing Achievement v. Lucule Salter Packard Children's Hospital involves a hospital that opened a new wing and allowed some CRONA union nurses to apply for positions in it.  The new wing had non-union nursing coordinators.  CRONA alleges that union positions had been replaced with non-union ones in violation of the now expired collective bargaining agreement (CBA) for which arbitration should be compelled.  The Hospital argues that never happened and this is a representation matter which would be properly before the National Labor Relations Board (NLRB); it moves for summary judgment in that regard.  Judge Jeremy Fogel explained that the CBA stated that disagreements about terms in the CBA are subject to arbitration (and not litigation, unless a possible interpretation is unreasonable).  Here, the parties dipute whether union positions were reassigned to non-union personnel:


Here, the CBA properly defined the scope of the bargaining unit, and the parties agreed to arbitrate disputes “involving in the interpretation or application” of that agreement.

Rodriguez v. SEIU is a complaint a group of janitorial workers in high rise buildings in San Francisco against the SEIU Local 87 for violating various provisions of the Labor Management Relations Disclosure Act (LMRDA).  The complaint alleges various acts of wrongdoing to get the CBA approved including not making spanish-language translations of the materials available, throwing people out of a meeting who had questions about the CBA, and "stuffing" ballot boxes by giving certain members more than one ballot.  Magistrate Joseph C. Spero stated that the Union has no obligation to provide complete or truthful information, but removing people from meetings and ballot stuffing amounts to discrimination actionable under LMRDA.  He granted the motion to dismiss in part and denied it in part.

Dang v. Sutter's Place raises a lot of the issues found in Carr above.  Here, Ms. Dang is represented by very able counsel who is able to frame her claims in terms that do not require interpretation of the CBA and therefore are not preempted by LMRA.  Ms. Dang claims she was not paid overtime under state or federal law, Sutter's Place (doing business as Bay 101) counters that this requires interpretation of the CBA which calculates overtime in five minute increments as oppose to fifteen minute increments under federal law.  Judge Ronald M. Whyte stated:


Although plaintiff's overtime claim isbased in part on entitlement to overtime compensation for missed rest and meal break periods,interpretation of the CBA is not necessary for a determination of whether plaintiff in fact was precluded from taking her breaks. Thus, the second cause of action is not preempted.

He denied the motion to dismiss.
Posted by Unknown at 3:38 PM