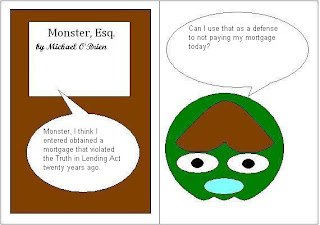 Several Northern California Judges have recently released opinions in mortgage and insurance cases among them:

Rivera v. BAC Home Loans involves a couple who obtained a Home Equity Line of Credit (HELOC) on their property in Alameda California on August 18, 2006.  They defaulted and now claim violations of the Truth in Lending Act (TILA) by not being informed they could rescind the loan after three days.  They also claim common law fraud against their mortgage provider for exaggerating their income (and ability to pay the loan).  They filed their original complaint on June 2, 2010 which effectively doomed their efforts for recovery.  Every cause of action alleged had a statute of limitations of between one and three years.  The Riveras were at least ten months late and provided no basis for equitable tolling.  Judge Richard Seeborg dismissed the complaint without leave to amend.

Carnero v. Washington Mutual is similar to Rivera above except the property was located in San Jose.  Gabriella Carnero complained that a banker duped her and her brother into getting a mortgage and refinancing it in 2001, 2003 and 2007.  Judge Jeremy Fogel explained:


The SAC omits all of the previously pled state law claims – it sets forth only two claims,the first asserted under TILA, HOEPA, and the Real Estate Settlement Procedures Act (“RESPA”), 12 U.S.C. § 2607, and the second asserted under TILA. Both claims suffer fromnumerous deficiencies.

Those deficiencies included the one-year statute of limitations in TILA, HOEPA and RESPA and a failure to make a tender offer in the TILA claim.  He granted the motion to dismiss without leave to amend.

State Farm Life Insurance v. Cai is an interpleader action with an insurance company who wants to pay out a $250,000 life insurance policy.  Ying Deng obtained a $250,000 life insurance policy from State Farm listing Jason Cai as the only beneficiary.  On May 28, 2003, Ms. Deng died... because Mr. Cai killed her, an act which has lead to Mr. Cai's current incarceration.  California has what is commonly known as a "slasher statute" as Judge Lucy H. Koh explains:


The Estate [of Ms. Deng] claims that Cai feloniously and intentionally killed his wife, Ying Deng, and that California Probate Code § 252 therefore mandates that the insurance proceeds pass to the Estate as though Cai predeceased Ying Deng.

State Farm wants to drop the money off at the Courthouse, take a share for its attorneys fees and costs and be done with the matter.  Judge Koh stated that it needed to follow federal interpleader procedure in order to do that:

She denied the motion for judgment.

Wahl v. American Security Insurance Co. is a putative class action regarding "forced placed insurance" policies on real property.  Ms. Wahl contends that the holder of a deed of trust has insurance on the real property either by the homeowner's purchase or by an agreement in the loan.  When the homeowner cancels her policy, ASIC charges premiums for insurance that is already provided by terms of the loan (a Lender's Loss Payable Endorsement clause, "LLPE") which provides no significant value.    In a previous order, Judge Richard Seeborg explained the claim in this manner:


The FAC [first amended complaint] alleges that, upon the expiration of Wahl's Farmers Policy, ASIC, in cooperation with EMC [Mortgage Company], cancelled the Farmers Policy's LLPE and substituted its own FPI-a practice which, although within the bounds of the Deed of Trust, was singularly disadvantageous to Wahl and unsupported by any apparent reason other than the fact that ASIC and EMC both stood to benefit financially from the immediate placement of FPI. Moreover, according to the FAC, these business practices were the direct result of a pre-existing contract between ASIC and EMC, to which Wahl was not a party and of which she presumably had no knowledge.

Judge Seeborg found this allegation presented a genuine issue of material fact as to whether ASIC violated California's Unfair Competition Law (UCL).  Having tried and failed to vanquish this claim on four previous dispositive motions Judge Seeborg required the defendants to seek leave of the court before filing future dispositive motions.


In light of defendants’ history of filing seriatim motions, and in the interest of efficientcase management, this Court required ASIC to request permission from the Court before filing anyfurther dispositive motions.

In the present motion, ASIC claims that Ms. Wahl's UCL claim is really a challenge of an insurance rate and she failed to exhaust her administrative remedies before bringing the claim.  Judge Seeborg saw things differently.


The fair reading of Wahl’s UCL claim as alleged and as defended in her many opposition motions supports her argument that the claim is directed at ASIC’s allegedly unfair conduct and not at the Commissioner’s rate.

He declined the request to file another motion for summary judgment.
Posted by Unknown at 8:56 PM