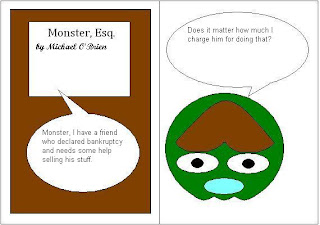 Two Northern District of California judges have recently released memorandum decisions in bankruptcy proceedings among them:

In re Multiple Allied Services involves the debtor's landlord (Kayland of Sacramento) who seeks to have its legal fees declared as rent and given administrative priority in a Chapter Seven bankruptcy proceeding.  Under 11 U.S.C § 365(d)(4) within 120 days of declaring bankruptcy, the debtor must either assume its lease or deem it surrendered.  Here, the debtor failed to act by December 17, 2009 (abandoning the lease) and did not vacate the premises until ordered to do so on January 22, 2010.  The trustee and Kayland entered a stipulation that the legal fees incurred in getting the debtor off the property were administrative rent.  Now, the trustee has a change of heart and wants the legal fees to go into the unsecured creditor's pile.  Judge Thomas E. Carlson found no good reason for setting aside the stipulation.  In re Cukierman, (9th Cir. 2001) dealt with a similar issue and construed § 365(d) to cover debts prior to surrender, thus the attorneys fees incurred prior to surrender received administrative priority.

In re Avon Townhomes Venture is also a Chapter Seven bankruptcy proceeding.  Here, James McClenahan is the president, CEO and 100% shareholder of Eagle Home Loans.  The debtor's attorney contacted him to sell a piece of property pursuant to a court order allowing the properties sale.  He sold the property and received a commission of $18,300.  Judge Roger L. Eferemsky was not pleased with the debtor employing people without his approval.


McClenahan's Response does not dispute that neither he nor Eagle Home Loans obtained the Court's authorization to be employed as broker for the Debtor. The Response also does not dispute the Court's finding that McClenahan and/or Eagle Home Loans acted as the broker on behalf of the Debtor. Instead, McClenahan appears to argue, without any supporting legal authorities, that disgorgement would be improper because the Commission was earned and the estate received the benefit of the sale. However, "[a]s a general rule the equitable remedy of quantum meruit cannot be available where the fees are barred by law under the bankruptcy rules." Halperin v. Occidental Financial Group. Inc., (9th Cir. 1994). Otherwise, any unapproved professional could assert an equitable claim to compensation.

Judge Eferemsky ordered Mr. McClenahan to repay the commission.
Posted by Unknown at 10:32 AM