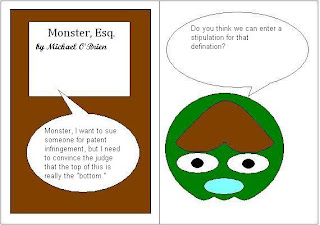 Several Northern District of California judges have issued rulings in patent and trademark cases.  Among them:

AWgi v. Duncan & Elbaz is a trademark infringement dispute where Allied Van Lines argues that a series of impostors are using its mark to offer similar services.  It alleges that Edan Elbaz is the ringleader, but it cannot serve him because he is evading service. In order to locate him, Allied would like to depose Mr. Elbaz's attorney. Magistrate Harold R. Lloyd stated that the information's release depended on whether it was given in the process of legal representation rather than merely being incidental to it. He decided the latter:


It would be fundamentally unfair to allow Elbaz to cloak his whereabouts with the protections of the attorney-client privilege in order to avoid service of process when the legal advice he sought did not directly involve his location. Thus, for the reasons explained above, Elbaz’s location is not privileged.

He denied the motion to quash.

Care Fusion Corp v. Medtronic is a patent-centric antitrust claim.  Care Fusion argues that Medtronic acquired companies with patents on  vertebral compression fracture (VCF) treatment and then controlled the market on such treatment by threatening litigation on those who attempt procedures that infringe its patents. Patent litigation is expensive and the threat of using it can be a way of keeping people off the market.  Judge Koh explained that where the litigation is shown to be a scam by clear and convincing evidence there is a violation of § 2 of the Sherman Act.

Care Fusion's Handgaurds claim failed at the pleading stage because it failed to show how a press release threatening patent enforcement caused it any injury.  More common injuries are being compelled to enter into a license agreement to avoid litigation. Judge Koh dismissed the complain with leave to amend.

Elan Microelectonics v. Apple is a patent infringement suit presently at the claim construction stage.  Apple raised an interesting defense, a predecessor of Elan sued under the same patent, argued a narrower construction than it argues and now seeks a more broad interpretation.  Apple contends that either issue preclusion or judicial estoppel should prevent it from obtaining the broader interpretation.  Judge Richard Seeborg disagreed.


Because Apple can point neither to any express consideration by the Elantech court as to whether or not the claims should include a temporal sequence limitation, nor to any aspect of the summary judgment or injunction that would have been precluded even under the broader construction now proposed, Apple has not established that issue preclusion applies.

[Also,] there is no clear indication that Elan’s predecessor obtained any advantage by advocating for a narrower construction than Elan seeks in this action.

The entire order is available at the link above.
Posted by Unknown at 2:54 PM