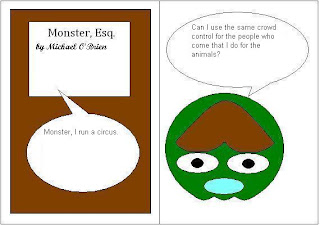 Several Northern District of California judges have recently released orders in civil rights cases and petitions for habeas corpus, among them:

In Bolbol v. Daly City, Deniz Bolbol and Mark Ennis went to the Cow Palace in San Francisco to hand out leaflets informing passersby of the horrors of circus entertainment and to film the animals with a unipod camera.  On September 12, 2008, they asked a police officer if they could move closer than barricades provided in order to film the animals.  A police officer responded and granted the request.  The following day, Ms. Bolbol and her friend returned.  This time a police officer saw them beyond the barricades and attacked Ms. Bolbol injuring her hand.  Officer Kranz then arrested and detained Ms. Bolbol for 2-3 hours before being released without a receipt of the personal property.  She sued under 42 U.S.C. § 1983 for violations of her First and Fourth Amendment rights.  At the same time employees of the circus chased down and assaulted Mr. Ennis.

Judge Marilyn Hall Patel ruled that the First Amendment claim failed because officer Kranz had qualified immunity.  At the time of the arrest, it was not clear whether the parking lot was a limited public forum for the purpose of the First Amendment.  Judge Patel granted summary judgment on that claim.  However, the Fourth Amendment claim was established in 2003 and well known by 2008.  She denied summary judgment on the Fourth Amendment seizure claim.


The facts,viewed in the light most favorable to plaintiff, support a reasonable inference that Carson employees attempted by threats and intimidation, namely harassment and physical attack, to prevent plaintiff from engaging in his speech activity.

Harris v. Noll is a petition for habeas corpus based on the Board of Parole Hearings's denial of an inmate's parole.  This blog has previously explained:


[A] prisoner can be denied parole if the Board of Parole Hearings (BPH) or governor finds "some evidence of dangerousness" if there is no finding then under Haggard v. Curry (9th Cir. 2010) the case is remanded to BPH to make a finding - the District Court cannot compel the warden to release the prisoner on parole.

[T]he  [In re] Lawrence, [(Cal. 2008)] standard requires more than this to support a finding of current dangerousness, however: "'something in the prisoner’s pre- or post-incarceration history, or his or her current demeanor and mental state, indicat[ing] that the implications regarding the prisoner’s dangerousness that derive from his or her commission of the commitment offense remain probative to the statutory determination of a continuing threat to public safety.'" Cooke [v. Solis, (9th Cir. 2010) (quoting Lawrence).

In 1987, a Sacramento County jury convicted Mr. Harris of second degree murder for killing his former girlfriend in a series of three attacks by strangling (she recovered after the first two attacks).  The trial court sentenced Mr. Harris to 15 years to life in prison.  His 2007 parole denial is the subject of the current petition.  Judge Lucy Koh stated that in this case, that something else was the petitioners escalating crimes of violence leading to his former girlfriend's death and a psychological assessment stating that he had a low to moderate rating for future violence.  She denied the petition for habeas corpus and did not issue a certificate of appealability.

Ferguson v. Curry is also a parole denial petition for habeas corpus. In 1983, Mr. Ferguson pled guilty to second degree murder, attempted murder and conspiracy to commit robbery. His conviction is on a felony murder theory because he "drove the getaway car and provided his two accomplices with rifles, ammunition, masks, and 'insider information' for how to rob the liquor store where petitioner had previously worked."  As bad as that is, Mr. Ferguson has a lot going for him:


There are a number of factors to be considered here. One of great importance is thatpetitioner had been in prison for twenty-three years at the time of the Board’s decision, and hewas eighteen years old at the time of the commitment offenses. Another is that it is notdisputed – even by the Board – that petitioner’s conduct in prison has been exemplary.  [A]mong other things, at the time of the decision he had not received a disciplinary violationcharge nine years, had completed numerous self-help, vocational and educational programs.  His psychological reports were favorable, he gave clear statements of remorse, and he hadfamily support and realistic parole plans.

So, what's the problem?


[T]he state [appellate] court’s factual finding that petitioner failed to demonstrate sufficient insight and continued to minimize his role in the crimes at the Board hearing is entitled to deference under Section 2254(d)(2) because it was a reasonable factual determination in light of theevidence that petitioner read a prepared statement of remorse instead of making one extemporaneously and he refused to answer questions at the parole hearing about why he didnot think a shooting might occur when he armed his accomplices with loaded weapons.

Judge William H. Alsup notes that weighing these factors is a really close call.  The Superior Court granted the petition for habeas corpus and the California Court of Appeals reversed.  However, that finding is subject to deference on federal collateral review.


Whether the Board’s decision was supported by “some evidence” of petitioner’s current dangerousness may be a close call, but it is not a close call when the additional layer of deference to the state court that this court must give under the “unreasonable application” standard of Section 2254(d)(1). Indeed, when the constitutionality of the underlying decision is a close question, it is almost a foregone conclusion that it was reasonable for the state courts to hold that it was not unconstitutional. That is the case here.

He denied the petition for habeas corpus.
Posted by Unknown at 10:11 PM