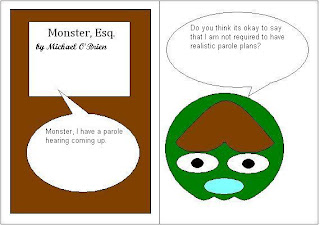 On Sunday, this blog covered Judge Maine M. Chesney's grant of Robert Lamar Ball's pro se petition for habeas corpus.  Certainly, he has much to be thankful for this Thanksgiving.  However, two fellow petitioners have less to be thankful since their judges denied the petitions for collateral relief.

Cleveland v. Curry is a Bostic claim to review prisoner discipline that would likely affect a future parole hearing.  There are basically two kinds of prisoner discipline review avenues under the Due Process Clause of the Fourteenth Amendment: first, there is a claim that there was a lack of protections available given the severity of the deprivation involved; second, there is a claim for the disciplinary decision lacking sufficient evidence.  Mr. Cleveland is pursuing the second in the current action.  In April 2008, Warden Curry issued an order limiting inmate personal property to six cubic feet and inmate legal materials to one cubic foot.  In June 2008, Mr. Cleveland received a Notice of Violation Report (NVR) for failure to comply with this regulation.  He claims that he had an inadequate amount of time to comply given his other duties around the prison.  Judge Charles R. Breyer noted that the Superior Court made findings on Mr. Cleveland's first petition for collateral relief that the warden's decision was supported by substantial evidence.  He noted that the Superior Court did not arrive at an unreasonable conclusion in light of the evidence and denied the petition.

Dowell v. Board of Parole Hearings is an appeal of the petitioner's (represented by counsel) denial of parole in 2006.  In 1983, a jury in Los Angeles County convicted the petitioner of murder for executing his former wife's new boyfriend with a shotgun.  Mr. Dowell claims to have joined the Church of Latter Day Saints while in prison, no longer is interested in consuming alcohol and has been reformed.  The Board disagrees, arguing that the petitioner has no realistic plans for employment upon release which indicates he possesses some "evidence of dangerousness" to the public.  Judge Claudia Wilken found some of BPH's findings faulty but ultimately agreed with BPH:


Petitioner argues that, because he has marketable skills, he is not required to have realistic parole plans.  Petitioner is wrong.  Both are important factors in predicting a prisoner's successful transition to a law-abiding life after release from prison.

She denied the petition for habeas corpus.
Posted by Unknown at 12:27 AM