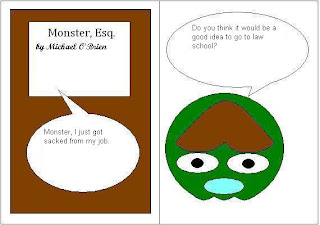 For Nancy Lewellen, life was great.  She earned a BA and MBA in her twenties and worked as a banker for over twenty years.  Then she was laid off in 1996 at age 49.  She reevaluated her life and decided to attend Santa Clara Law School which she financed with what is now about $154,000 in loans from The Educational Credit Management Corporation (ECMC) ($125,000) and Access Group, Inc. ($29,000).

That would be her undoing.  As Above the Law has noted, "Discharging Law School Debt in Bankruptcy Doesn’t Get Any Easier When You Are Old."

According to court documents, Ms. Lewellen graduated in 2000 and landed a job at "an established mid-sized firm" which terminated her a year later.  Her income descended gradually over the next few years until she was again terminated in 2005.  Amazingly, she was able to make over $16,000 in loan payments until mid-2006 when she began a solo practice, started a mortgage brokerage and really began to struggle.  Judge Thomas E. Carlson explains that her reported adjusted gross income was as follows:

There are websites that monitor some of the lower paying law jobs in the country.  But these are temporary and do not involve working for $11,000 a year for five years.  However, things seem to be getting brighter, she plans to earn $22,104 this year from her law practice, mortgage brokerage and social security.


This testimony was not contested.

ECMC stands to take the biggest bath from this situation, being owed about $125,000.  It takes a somewhat reasonable position stating that $100,000 in loans can be discharged with the remainder being paid through Income Based Repayment (IBR).  By my math, her payment would be about $73 a month for twenty-five years when she will be hit with a massive tax bill for the forgiven loan.  Judge Carlson thought that amount was reasonable.


Lewellen has not shown that she could not make the limited payments required under that formula, while still maintaining a minimal standard of living.

Access Group tried a different strategy, stating IBR was not available and blaming Lewellen for her predicament.

That's it! She just needs to find a job making more money because her problem is that she enjoys living on eleven grand a year.


Lewellen credibly testified that she has completed dozens of job applications without success.

While dozens of applications sounds low, it was sufficient for Judge Carlson to find that she wasn't malingering.


From observing Lewellen in court and listening to her work history, however, it does not appear to the court that she has the specific skills and temperament that would be necessary for her either to develop a more successful law practice, or to secure other than a starting-level job at a bank or law firm.

Is that really the problem?  I mean, she's on social security, but does Biglaw really care about that?


The starting-level job option is more-likely-than-not closed to Lewellen because of her age (64 at the time of trial).

Access Group then argues that Ms. Lewellen did not make a good faith effort to repay her loan because she lives in a nice house with a mortgage of about $3,500 a month.


Lewellen failed to minimize her housing expense, Access Group argues, because she continued to own and reside in an expensive single-family residence in San Francisco. Access Group notes that the minimum standard of living identified in [United Student Aid Funds, Inc. v. Pena, (9th Cir. 1998)] does not mean a middle-class standard of living.

So should she be homeless?


Access Group introduced evidence that Lewellen could rent a fully adequate apartment for $1,500 per month, much less than the mortgage and tax payments on her house.


By taking on boarders, and by using the mortgage payments and tax payments to reduce her income tax liability, Lewellen has effectively reduced her housing expense to [about $1,500 per month].

Judge Carlson discharge $129,000 in Ms. Lewellen's loans discharged but allowed a $73 monthly payment on a loan she will never repay, ECMC gets the $73 and Access Group gets nothing.  If Access Group is upset it should appeal now since once the plan is final the Supreme Court is unlikely to change it.