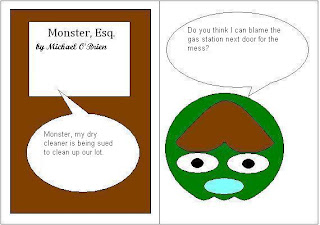 KFD Enterprises, Inc. v. City of Eureka is an environmental cleanup action under the Comprehensive Environmental Conservation and Liability Act (CERCLA). KFD owned and operated a dry cleaner in a contaminated lot in Eureka, California. Presently in the action, are plaintiff KFD, cross–claimant City of Eureka, cross-claimant Winzler & Kelly, defendant and cross-defendant Firbimatic SpA, defendant and cross-defendant RR Street & Co., third-party defendant Environmental Resolutions, Inc., (ERI), third-party plaintiff Unocal Corp, cross-claimant Union Oil of California and their corporate parent Chevron Corp. Basically, everyone thinks someone other than themselves is liable for the mess at the dry cleaners.

In that order, KFD’s claims against Firbimatic failed because KFD failed to allege any viable theory for liability. As Judge Maxine M. Chesney explains:


Indeed, KFD’s CERCLA and HSAA claims contain no factual allegations as to how Firbimatic can be held liable as a “covered person.” See Ascon Properties, Inc. v. Mobil Oil Co., (9th Cir. 1989) (holding, to avoid dismissal, plaintiff must allege “defendants are within one of four classes of persons subject to CERCLA’s liability provisions”).

In a second order, ERI’s liability is premised on an entirely different theory. According to the Third Amended Complaint (by both KFD and the City), ERI drilled wells to test the soil for contaminants on behalf of the petroleum defendants. When it did so, it broke an impermeable membrane, which caused contaminants to flow onto the property at issue. That is sufficient to plead operator liability under CERCLA. Judge Chesney largely denied ERI’s motion to dismiss.
Posted by Unknown at 8:58 PM