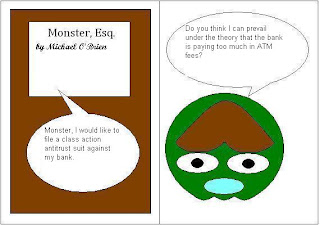 In re ATM Fee Antitrust litigation appear to be set for appeal since Judge Charles R. Breyer just denied the defendant’s motion for reconsideration. To pregame the appeal this blog will go back to the September 16, 2010 order granting summary judgment. This is a price-fixing class action antitrust case which is factually complicated and legally straightforward. As Judge Charles R. Breyer explains:


A single foreign ATM transaction generates up to four fees. Generally, a customer must pay two fees – one to the ATM owner for use of that entity’s ATM machine (known as a “surcharge”) and one to the bank at which he has an account (known as a “foreign ATM fee”). The card-issuer bank also pays two fees. It pays one of these fees, known as a “switch fee,” to the ATM Network that routed the transaction. It pays a second fee, known as an “interchange fee,” to the owner of the foreign ATM.

Plaintiffs allege that several large banks have conspired with [the Star Network of ATMs] to fix the interchange fee that a card-issuing bank pays to an ATM owner when a foreign ATM transaction involving the card-issuing bank’s customer is routed over the Star Network. As a result of this alleged “price fix,” interchange fees are, Plaintiffs maintain, higher than they would otherwise be.

Under the Supreme Court’s decision in Illinois Brick Co. v. Illinois, (U.S. 1977) only the direct purchaser may recover money damages in an antitrust case. Here, the large banks (not the consumers) pay the interchange fee, so the ATM users do not have a claim to money damages, The Ninth Circuit has recognized a few exceptions to the direct purchaser rule which will be the landscape for the appeal. Under Arizona v. Shamrock Foods Co., (9th Cir. 1984), if several people conspire to fix several prices then damages are available for each fixed price. Oddly, the plaintiffs have not alleged that the foreign ATM fees are fixed, since the fee they are the “direct purchaser” of is not fixed they cannot recover money damages. Similar is the situation in Freeman v. San Diego Association of Realtors where the consumer deals with the direct purchaser would never sue the price-fixer because, for instance, there is a parent-subsidiary relationship. Judge Breyer found that improbable under the facts of the case because most banks lose money on ATM transactions, which is a great reason to sue.
Posted by Unknown at 8:58 PM