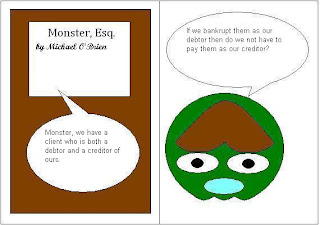 In a new feature on this blog, here is a preview of some upcoming trials:

Del Campo v. American Corrective Counseling Services Inc, is a massive class action headed to trial soon, so this blog wants to pregame the trial a bit by reflecting on the June motion for summary judgment. Elena Del Campo and others claim that ACCS implemented the Santa Clara County Bad Check Restitution Program (“Bad Check Program”) by sending demand letters purporting to be from a California District Attorney’s office attempting to collect a dishonored check in violation of the Fair Debt Collection Practices Act (FDCPA). In that motion, Judge Jeffery White found that Mealing and Hansey as officers for ACCS were liable as debt collectors under FDCPA, though it noted, that the Ninth Circuit has yet to rule on the issue. The defendants are liable under California’s Unfair Competition Law for that reason. However, the liability of Inc. Company, who had a restitution partnership arrangement with ACCS, remains and issue for trial. Similarly, one of the largest unresolved issues is damages. The plaintiffs claim damages of $47,497,386.50, however the defendants claim they were entitled to those fees by statute and they cannot be recovered. It should be an interesting trial.

First National Insurance Co. v. Geo Grout is an insurance indemnity matter. Geo Grout entered in a series of private and public works contracts, which required it to furnish the respective project owners with a performance bond, and a labor and materials bond. First National issued the bonds on behalf of Geo Grout, and Geo Grout failed to meet various contract obligations resulting in claims against the bonds. Geo Grout failed to indemnify, exonerate and hold First National harmless from the damage incurred because of the bonds under an indemnity agreement between the parties which gives rise to the current suit. This case has an added complication.

Geo Grout is currently working as a subcontractor on the Sukut Construction, Inc. on the San Pablo Dam Seismic Upgrade project. For the East Bay Municipal Water District. For a variety of reasons, Sukut has not paid Geo Grout $1.37 million. Sukut’s payment bond surety is Safeco Insurance Company. First National is a wholly owned subsidiary of Safeco (which is itself a wholly owned subsidiary of Liberty Mutual). Geo Grout is suing Sukut for that amount in Contra Costa County Superior Court. As a result of this, First National owes Geo Grout more than Geo Grout owns First National. Magistrate James Larson noted there was too much to sort out at this point:


The Court finds too many disputed issues of fact, including the amounts owed and by whom to whom, the relationship between First National and Safeco, the contractual obligations between the parties and non-parties, and the rights of the other creditors and sureties, to conclude that First National has established a likelihood of prevailing on its motion for summary judgment.

He denied summary judgment and a writ of attachment for that reason.

This blog has dubbed Oracle v. Santa Cruz County Planning Department, “The Hedge Case” because it is a million dollar lawsuit over administrative bungling over a permit to build a fence because of a hedge in Aptos, California.  Judge Jeremy Fogel has recently ruled on a motion in limine which forms some of the contentious issues in this rapidly approaching trial.

The Oracles plan to introduce evidence about the Santa Cruz County Code regulating the height of fences and hedges, not to show that it is determinative, but to show the parties motivations. The Oracles (perhaps strategically) have not yet identified a property they plan to compare with their own to show that similarly situated properties were subject to different treatment. However, Judge Fogel plans to allow evidence of this on a case-by-case basis. The Oracles want to call Laughlin, a former code supervisor as an expert witness, but have not, a of yet, explained why he is an expert. Lyng is expected to testify that people would have purchased the property had their not been a NOV on it, though at her deposition she could not identify who that could be. The Orcacles plan to introduce an email chain where different employees at the County said nasty things about them.

The order also notes that the defendants recently made a settlement offer to the Oracles., but contains no details on what that arrangement was.
Posted by Unknown at 9:55 PM