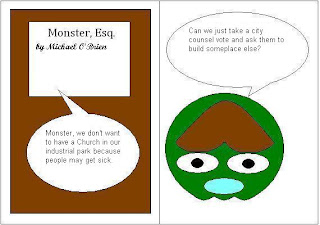 Matt McReynolds at the Pacific Justice Institute sent me the case of International Church of the Foursquare Gospel v. City of San Leandro where the Ninth Circuit reversed Judge Phyllis J. Hamilton's grant of summary judgment for the City.

Faith Fellowship Foursquare Church (the Church) wanted to build a church on previously industrial zoned on two lots along Catalina Ave. in the City and requested a conditional use permit to do so.  The City created a 92 acre zone for the Church, but did not include the Catalina Ave. lots.  By this time, the Church had to purchase the property because the time to close the escrow and an extension had expired.  The Church sued under the Religious Land Use and Institutional Persons Act (RLUIPA) and 42 U.S.C. § 1983 claiming that the City violated its First and Fourteenth Amendment rights.  Under RLUIPA when the government imposes a substantial burden on a faith's beliefs, it must justify that burden with strict scrutiny.

At the trial level, Judge Hamilton found that the Church's relator's opinion that the Catalina Ave. properties were the only suitable site for the Church failed to create a genuine issue of material fact to preclude summary judgment.  The Ninth Circuit believed this was an error:


Here, the district court erred by dismissing the Church’s realtor's assertions out of hand. The Church’s realtor presented significant evidence that no other suitable properties existed: heexamined each of the 196 parcels rezoned for assembly use,and found them unsuitable for the needs of a large religious congregation. Of the several properties suggested by the City,only a lumber yard was even listed for sale and it was under contract. Other properties—including a Kraft factory, a shopping center, and a mobile home park were deemed unsuitable because of size, configuration, safety issues, and current uses.

There is a circuit split in how to handle these cases. Compare Civil Liberties for Urban Believers v. City of Chicago, (7th Cir. 2003) (finding that a lack of suitable properties on the market does not mean that the denial of the Church’s desired site imposes a substantial burden) and Westchester Day School v. Village of Mamaroneck, (2d Cir. 2007) (finding "that a burden need not be found insuperable to be held substantial.") This is a place for legitimate legal debate and the Ninth and Second Circuits find themselves at odds with the Seventh Circuit. The Supreme Court may some day be called to resolve this matter.

The Ninth Circuit reversed and remanded the case to Judge Hamilton.
Posted by Unknown at 8:26 PM