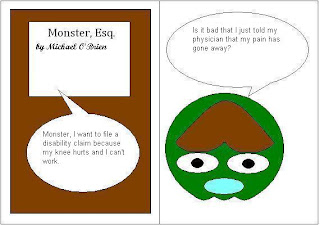 The federal judge reviews each case to determine if the ALJ's decision is supported by substantial evidence and made with the correct application of the law. In particular, compliance with the procedure in 20 C.F.R. § 404.1520(a). That procedure involves five steps:

At Step Five, the Commissioner carries the burden of considering the claimant’s RFC, age, education, and work experience and determining whether the claimant can "make an adjustment to other work" that "exists in significant numbers in the national economy."

Thomas v. Astrue involved a claimant with a history of depression, bipolar disorder and methamphetamine use which resulted in his incarceration in 2006.  The ALJ found that Mr. Thomas was disabled from June 12, 2007 to March 28, 2008, but that failed to meet the twelve month durational requirement for benefits under 42 U.S.C. § 423(d)(1)(A). Judge Lucy H. Koh agreed:


Aside from the medical evidence, the record also supports the ALJ’s determination that, despite moderate difficulties, Plaintiff could perform activities of daily living such as making himself food, performing household chores, and doing his own laundry. Tr. 40. Plaintiff could also function socially with others including family, friends, and even with strangers in support groups. Tr. 310-12.

She granted summary judgment for the Commissioner.

Serrano v. Astrue involved a claimant who worked as a housekeeper until she had a stroke and developed depression.  Her disability case went back and forth between the ALJ and Social Security Appeals Counsel for a while mostly because a plethora of physicians had rendered opinions ranging from malingering to an inability to work with mild mental disabilities.  The Commissioner finally found that Ms. Serrano was disabled, but not before July 22, 2008 she wanted benefits from 2005, so she appealed.  Judge Jeremy Fogel agreed with the ALJ that Ms. Serrano was not credible.


[A]lmost all of the physicians who evaluated or treated Serrano following her first hospitalization in August 2005 suspected her of malingering. See AR 113 (Dr. Laster noted that Serrano’s symptoms were ["]embellished"); AR 347 (Dr. Lopez found inconsistencies and signs of poor cooperation and malingering); AR 385 (Dr. Guisado determined that her symptoms were "psychogenic" after conducting various medical tests); AR 455-58 (Dr. Bilbrey administered a malingering test to Serrano and she performed poorly on it).

He granted summary judgment for the Commissioner.

Godar v. Astrue involved a claimant who worked as a truck driver, sales scheduler and electronics technician before injuring his back.  Before the Agency, the ALJ discounted much of Mr. Godar's evidence, including his own testimony, that of his former wife. Of course it probably did not help to tell his doctors that the pain went away.


The ALJ’s decision further notes December 2004 medical records in which plaintiff reported that he no longer had pain in his left knee, as well as an October 2005 medical record in which plaintiff reported that while the lower grade pain was still present with hip and testicular pain, "the pain in his back is considerably better," that he walks about 100 yards fromeight to ten times a day; he does pool therapy; and "his pain is a 3/10." (AR 11, 200, 219).

Magistrate Harold R. Lloyd agreed with the ALJ and granted the Commissioner summary judgment.
Posted by Unknown at 2:41 PM