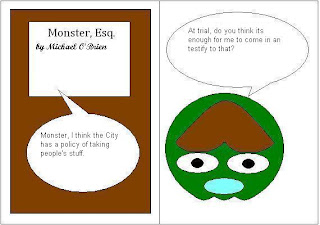 42 U.S.C. § 1983 imposes liability upon anyone "acting under color of" state law who deprives another person of "of any rights, privileges, or immunities secured by the Constitution...."  Here are some of the latest summary judgment orders on 1983 cases from the judges in the U.S. District Court for the Northern District of California.  The first case does not involve a prisoner, and the rest do.

In Dabney v. City of Hayward the plaintiffs allege that Hayward police officers unlawfully forced them to leave their home following a dispute with someone uninvolved with the case depriving them of the right to possess and use their property in violation of the Fourteenth Amendment's Due Process Clause.  At issue is whether the City has a policy or custom of making such deprivations so as to incur liability under Monnell v.  Department of Social Services (U.S. 1978).  Rather than deposing the city officials, seeking city board minutes or investigating sources in newspaper articles, the plaintiffs were prepared to go to trial with only their own testimony.  Judge Bernard Zimmerman said that wasn't enough to preclude summary judgment:


Plaintiffs, however, have failed to produce any evidence that defendant's policies or customs caused their claimed injury. The only evidence submitted by plaintiffs is theirdeclarations, but these declarations do not establish or even discuss any of defendant’s policies or customs. Plaintiffs argue that they will be able to prove, by way of testimony at trial, their allegations from the second amended complaint that the "officers acted in concert with a custom of the Defendant municipality." Opposition at 7. But plaintiffs cannot rely on their pleadings or future testimony to oppose defendant’s summary judgment motion.

He granted the City's motion for summary judgment.

Thomas v. Celaya is a pro se prisoner's excessive force complaint against prison guards which he claims violated his Eighth Amendment right to be free of cruel and unusual punishment.  The guards move for summary judgment stating that force was necessary because Mr. Thomas refused to return to his cell upon being ordered to do so.  Judge Jeremy Fogel agreed:


By his own admission, Plaintiff initially resisted Celaya’s orders to leave the program office. Defendants had a legitimate concern about maintaining discipline as well as the safety and security of the program office where both correctional officers and inmates were present. If Plaintiff was behaving erratically, evenif an unidentified officer was attempting to remove his shoe, it does not appear that Celaya responded unreasonably to subdue Plaintiff quickly and avoid further physical altercation. The amount of force used was no more than was necessary to stop Plaintiff’s erratic flailing; Celaya forced Plaintiff to the floor and did nothing further.

Stelly v. Tootell is a pro se prisoner's complaint against prison physicians for deliberate indifference to his serious medical needs in violation of the Eighth Amendment right to be free of cruel and unusual punishment.  Mr. Stelly complains that he has a variety of medical ailments that were left untreated.  However, the doctors submitted evidence that 1) the ailments were treated and 2) the treatment was not constitutionally deficient.  Judge Claudia Wilken found that there was no genuine issue of material fact.


First, as with his epilepsy and depression claims, Plaintiff's allegations that Defendants failed to act when informed of his medical conditions are wholly lacking in specific detail or documents, failing to amount to evidence that Defendants' response to his grievance was unconstitutionally late or inadequate.

She granted summary judgment for the defendants.

Harris v. Thom is a pro se prisoner's excessive force complaint against a prison guard where he claims the guard violated his Eighth Amendment right to be free of cruel and unusual punishment.  The plaintiff was at a hearing as to whether he should be placed in a Behavior Modification Unit due to his numerous violations of prison policy.  The committee decided he should be so placed and the plaintiff threw a fit and refused to leave the room.  Officer Thom removed the plaintiff from the room and a tussle later ensued resulting in the plaintiff being thrown on the ground which is the subject of the current lawsuit.  Judge Jeremy Fogel found that the guard's behavior was reasonable.


The situation admittedly became more complicated when Plaintiff and the escorting officers reached the entrance to C-section, where Plaintiff claims Thom tripped and slammed him to the floor. However, even viewing this evidence in the light most favorable to Plaintiff, the Court cannot conclude that Thom acted inappropriately under the circumstances. The declarations offered by Thom give consistent accounts of Plaintiff’s resistance from the hearing room to the entrance of C-section, where Plaintiff attempted to stop the escort by placing his feet on the floor and pushing his body backwards.

Estrada v. McBride is a pro se prisoner at Pelican Bay State Prison's complaint that he was improperly validated as a gang member which resulted in his indefinite placement in the Secure Housing Unit (SHU).  The SHU is a kind of solitary confinement that NPR covered a few years ago.  Under prison policy, there must be three items of evidence that a person is in a gang:


It is undisputed that the three pieces of evidence upon which the validation was based were (1) small pieces of paper found in plaintiff’s possession containing Mexican Mafia "micro-writing"; (2) a cup found among plaintiff’s property that had a hand-drawn Mexican Mafia gang symbol on it; and (3) his address book containing the name and prisoner number of a validated Mexican Mafia member.

Judge Phyllis J. Hamilton found that this was sufficient evidence to believe Mr. Estrada was a gang member.


Each of these last two items might not be particularly convincing standing alone, but that is not the question; the question is whether the three items of evidence were sufficient to show that the decision to validate plaintiff was not arbitrary, and the answer clearly is "yes." There was no due process violation.

She granted summary judgment for the defendants.
Posted by Unknown at 11:51 AM