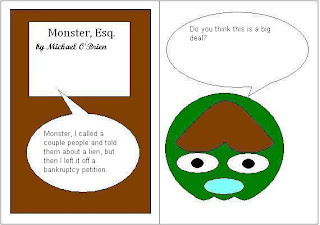 Every attorney makes mistakes and sometimes, on slow news days, those get broadcasted in published orders. Spirits in Stone  was a gallery in Sonoma, California that declared Chapter Seven bankruptcy back in November, filed by its attorney, Gregory Orton.  A few days after filing Mr. Orton send the Trustee a letter stating that US held a lien on an account owned by the debtor as a result of a judgment issued in another case.

However, when filing the debtor's statement of affairs requiring the debtor to describe all property that has been attached under legal process within a ear, Mr. Orton checked the box for "None."  Judge Alan Jaroslovsky, was initially livid, but calmed down by the time he put pen to paper.


At the hearing on this matter, the court initially decided that Orton should forfeit all his fees.This was based on the allegations of the Trustee that there were other false statements in the schedulesand that Orton delayed filing the case until the 90-day preference period had run. However, upon reflection, these matters were not proved and Orton was not given enough time to respond to them.Accordingly, the order the court will enter will be for return of $2,000.00 only, without prejudice tothe Trustee’s right to seek return of the balance of the fees Orton received.