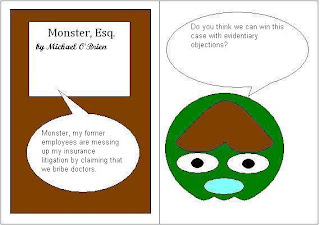 Here are some of the other recently released orders in the U.S. District Court for the Northern District of California.

In re Heller Ehramn LLP is a bankruptcy appeal of an order which is different than the two that this blog previously covered.  The issue here is valuation of unpaid rent under 11 U.S.C. § 502(b)(6).  As Judge Jeffery S. White explains:


Section 502(b)(6) of the Bankruptcy Code limits the damages a lessor may claim for therejection of a real property lease to:


(A) the rent reserved by such lease, without acceleration, for the greater of oneyear, or 15 percent, not to exceed three years, of the remaining term of such lease, following the earlier of--
(i) the date of the filing of the petition; and
(ii) the date on which such lessor repossessed, or the lessee surrendered,the leased property; plus
(B) any unpaid rent due under such lease, without acceleration, on the earlier of such dates.

There are two theories on the interpretation of the emphasized phrase above.  The landlord believes that the unpaid rent should extend to the remainder of the lease (aggregate rent theory) and the debtor thinks that it should extend only to the next term of the lease (time theory).  There is wide disagreement as explained in In re Connectix Corp (N.D. Cal. Bk. 2007).

Judge White agreed with the time theory and affirmed the Bankruptcy Court's decision.

Dubin v. BAC Home Loans Servicing is a mortgage fraud case where the plaintiff borrowed $660,000 from Bank of America in exchange for a deed of trust on her property in Bolina, California.  She sought to modify the loan a number of times but ultimately failed to do so and a foreclosure sale on the property pends.  BAC argued that since Ms. Dubin made no offer to tender, she cannot challenge its foreclosure sale.  However, since no sale has yet occurred there is no need to tender.  Magistrate Elizabeth D. Laporte explains:


Defendant, however, has cited no case applying the tender rule where, as here, there has been no foreclosure sale. Accordingly, Defendant’s Motion to Dismiss based on failure to tender is denied.

However, the Defendants succeeded on every other claim resulting in dismissal of the complaint with leave to amend.

Carten v. Hartford Life & Accident Insurance Co is an ERISA case that this blog has previously covered here. Mary Carten is suing for a denial of disability benefits.  Hartford argues 1) she isn't disabled and 2) it's claims process is fair.  Ms. Carten has prepared quite an evidentiary record including a declaration from a physician stating that Hartford encouraged him to manipulate his conclusions.  Judge William H. Alsup considered those materials.


Regarding the Kale declaration, which is attached as Exhibit A to the DeBofsky declaration, defendants list almost every objection in the book, including lack of foundation, authenticity, relevance, hearsay, speculation, and improper impeachment. These objections are overruled.

This was enough to earn some more discovery on the issue and an evidentiary hearing.  Welch v. Metro. Life Ins. Co., (9th Cir. 2007) (noting that some discovery aimed at demonstrating a conflict of interest may be appropriate in an ERISA action).  Judge Alsup denied the motion for summary judgment without prejudice.
Posted by Unknown at 8:42 PM