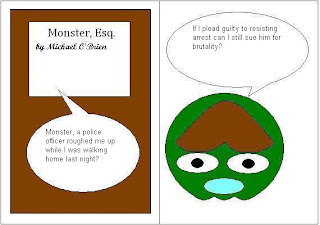 Woodward v. Menlo Park is a police brutality action involving the plaintiff's arrest on February 3, 2007.  According to Mr. Woodward, Officer Ron Venzon told him to stop at about 9:47 pm. He first ignored, but later complied and Officer Venzon tackled him and repeatedly kicked him resulting in a collapsed lung and five broken ribs which required three days of inpatient treatment at Standford Hospital. While being beaten, a crack pipe fell out of his pocket leading to the resulting arrest. Officer Venzon responds that he told Mr. Woodward he wanted to speak to him at which time Mr. Woodward threw away a crack pipe and begun running. 20-30 feet later Officer Venzon tackled the plaintiff and handcuffed him. He states that Mr. Woodward's injuries resulted from being tackled.  As part of a plea deal, Mr. Woodward pled guilty to resisting, delaying or obstructing a police officer.

Mr. Woodward is proceeding pro se, but did a pretty good job arguing his case so that he met all of the elements of resisting arrest, but in such a way that it does not prevent his civil rights claim under Heck v. Humphrey.


[T]he Ninth Circuit has held that Heck does not necessarily bar § 1983 actionsalleging excessive force despite the plaintiff’s conviction for resisting arrest. Specifically, “a §1983 action is not barred by Heck unless the alleged excessive force occurred at the time the offense under § 148(a)(1) was being committed.” Smith [v. City of Hemet (9th Cir. 2004)]. Thus, “as long as the officers were acting lawfullyat the timethe violation of § 148(a)(1) took place, their alleged acts of excessive force, whetherthey occurredbeforeorafter[plaintiff] committed the acts to which he pled, would notinvalidate his conviction.” Smith[;] see also Pelayo v.City of Downey,  (C.D. Cal. 2008) ("… the key question under Smith is whether the moment at which the criminal violation occurred is separate from themoment at which the constitutional violation occurred"). In the instant case, under Plaintiff’s version of events, he initially ignored and walked away from Defendant, but then stopped andraised his hands when Defendant exited his vehicle. According to Plaintiff, excessive force was not used on him until after he raised his hands and "surrendered" to Defendant. Therefore, genuine issues of material fact regarding the circumstances surrounding Defendant’suse of force also preclude summary judgment under Heck.

Tufono v. Valenzuela involves a pro se prisoner who was beaten to a point of unconsciousness by his cell mate.  Mr. Tufano claims that two guards put him with another inmate with a different classification contrary to prison policy.  The guards responded that they looked at the files and that they determined (erroneously) that the cell mates were compatible. As Judge Ronald M. Whyte explains:


The failure of prison official to protect prisoners from attacks by fellow prisoners or from dangerous conditions at the prison violates the Eighth Amendment only when two requirements are met: (1) the deprivation alleged is, objectively, sufficiently serious; and (2) the prison official is, subjectively, deliberately indifferent to prisoner safety. Farmer [v. Brennan (U.S. 1994)].

Getting beaten to a point of unconsciousness is pretty serious, the fight was over whether there was deliberate indifference.

That oversight is sufficiently serious to create a genuine issue of material fact and thwart summary judgment.  Judge Whyte denied the plaintiff's motion for summary judgment.
Posted by Unknown at 8:32 PM