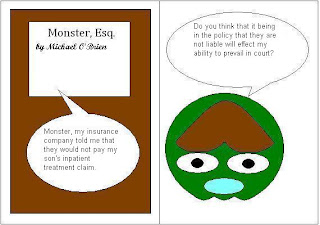 Here are two cases in the U.S. District Court for the Northern District of California that I thought were interesting: an ERISA case and a mortgage case.

Daniel F. v. Blue Shield of California is a judicial review of a plan administrator's denial of a claim for reimbursement of medical treatment.  Daniel F. and Shan O. adopted Geoffrey when he was 13 years old.  Geoffrey had some psychiatric problems and his parents placed him in the Island View Residential Treatment Center("IVRTC") in Utah on May 24, 2007 for about nine months. I have no idea how much this cost but apparently less than a year and a half of ERISA litigation. Blue Shield refused to pay giving rise to this litigation. This is a case where the insurer told the insured it would not pay for this treatment multiple times:

The Plaintiffs do not dispute this reading of the policy however, they argue that

Judge Phyllis J. Hamilton ruled that there was no violation of the Parity Act:


In particular, the Parity Act does not require that insurers cover residential treatment,and does not require coverage for all "medically necessary health care service," as plaintiffs claim. Rather, it requires only parity of coverage for "outpatient services," "inpatient hospital services," and "partial hospital services," and only for a health care service(physical or mental) that is a benefit provided under a given plan.

She granted summary judgment for the defendants.

Sarbaz v. Wachovia is a typical mortgage fraud case.  The plaintiff had a hard time paying off his loan so Wachovia refinanced it for $860,000 at 7%.  The plaintiff claims that this is a worse deal than his original loan and he is suing to have his foreclosure undone.  Wachovia moves to dismiss because the plaintiff has not shown an effort to tender the mortgage proceeds.  Judge Charles R. Breyer agreed and dismissed the claim with prejudice.  Similarly, the plaintiff's claim under California's Unfair Competition Law (UCL) failed:


Nor has Sarbaz adequately pleaded how members of the public would likely be deceived by Wachovia’s representations regarding the terms of his loan. Those terms were unambiguous and were included in plain language in the Fixed Rate Mortgage Note.

Judge Breyer dismissed the claims with prejudice.
Posted by Unknown at 1:51 AM