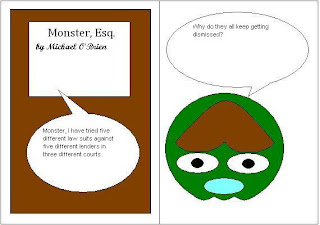 Many judges on the U.S. District Court for the Northern District of California use the term "mortgage fraud" to describe the class of lawsuits where a homeowner contests his or her residential foreclosure, or is trying to prevent that foreclosure by arguing that the borrower was unaware of the loan terms in violation the Truth in Lending Act (TILA), the Real Estate Settlement Procedures Act (RESPA) or the Home Owners Loan Act (HOLA).  The term is a bit misleading since fraud is rarely at issue and whether the homeowner complied with various procedural requirements usually is.

Arias v. Capital One Mortgage involves a plethora of state law claims (including fraud) and a violation of TILA as the lone federal cause of action.  Mrs. Arias refinanced her home mortgage with B.F. Saul Mortgage Company, through some unknown series of transactions, Chevy Chase Bank ended up the the loan which was then acquired by Capital One who is current owner of the mortgage and the defendant in the current case.  There are essentially two claims first, that Capital One is vicariously liable for the predecessor's various torts involved in the refinance transaction.  Second, that Capital One is vicariously liable for the predecessors TILA violation.  Judge Marilyn Hall Patel explains:

With regard to TILA, the statute of limitations had run:


It is clear that the one-year statute of limitations for plaintiffs’ TILA claims for civil damages has run. Plaintiffs entered their loan on June 22, 2007 when they signed the loan documents in defendant Rojas’ office, and did not commence an action against defendants for TILA violations until March 1, 2010, after they had received a notice of trustee’s sale of the property.

In Dancy v. Aurora Loan Services the plaintiff is contesting the defendant's foreclosure sale.  In 2005, the plaintiff took a $511k loan secured by a deed of trust on property in Lagunitas, California held by the Mortgage Electronic Recording System (MERS).  He failed to make payments, MERS foreclosed, Aurora bought the property, filed an unlawful detainer action in Marin County Superior Court and received a writ of possession.  The question here is whether the Marin County action precludes Judge Saundra Brown Armstrong from now hearing the case.


However, as in Malkoskie[v. Option One Mortgage Corp. (Ca. App. 2010)], Plaintiff’s challenges to the foreclosure and Aurora’s acquisition of the Property necessarily were encompassed by Aurora’s unlawful detainer action. As a result, the judgment rendered in that action, which was affirmed on appeal, bars all claims by Plaintiff which challenge Defendants’ right to proceed with the foreclosure and trustee’s sale.

In Aniel v. EMC Mortgage Corp. the plaintiffs (who this blog previously covered here) were big money real estate investors who were rendered bankrupt when the real estate market collapsed.  The property at issue is a $2.3M home in Marin county which secured a $1M loan.  They are proceeding pro se with the permission of the bankruptcy court to sue the lenders under the Fair Debt Collection Practices Act (FDCPA).  As this blog has noted before, mortgage foreclosure is not a debt collection covered by FDCPA.  Judge Saundra Brown Armstrong, again, dismissed the federal claim with prejudice and remanded the matter to state court.
Posted by Unknown at 5:10 PM