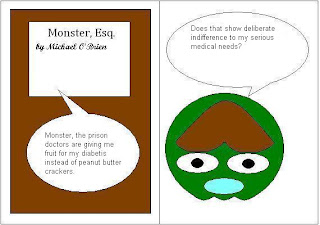 42 U.S.C. § 1983 imposes liability upon anyone "acting under color of" state law who deprives another person of "of any rights, privileges, or immunities secured by the Constitution...."  Here are some of the latest summary judgment orders on 1983 cases from the judges in the U.S. District Court for the Northern District of California.  The first case does not involve a prisoner, and the rest do.

Bolling v. Curry is a prisoner's pro se civil rights complaint where he complains that a nurse refused to treat his stroke because it occurred over a weekend.  It is presently before Judge Phyllis J. Hamilton on the nurse's motion for summary judgment. Judge Hamilton explains:


It is undisputed that on September 17, 2006, plaintiff was seen by the defendant,who was the triage nurse, and that he complained to her that he had a headache and thathis right eye was twitching. She prescribed painkillers and told him to see a doctor the nextday if the pain persisted, which he did.

However, there was no indication that the nurse was aware of Mr. Bolling's stroke, so she could not be deliberately indifferent to it.


The evidence summarized above, however, contains nothing that would show that defendant knew plaintiff had had a stroke – if indeed he did have one – and her actions in caring for him could not have been deliberate indifference.

Lucas v. Silva is another prisoner's pro se civil rights complaint, where the plaintiff claims the warden and others deprived him of a lower bunk in his cell despite his medical need for one. Judge Claudia Wilken explains:

The gravamen of the complaint is that the warden and others knew of the lower back injury and didn't do anything about it.  The defendants claim qualified immunity on grounds that there was a lower bunk shortage and they were following seemingly lawful orders:

Judge Wilken found this order reasonable and granted summary judgment for the defendants.

Smith v. Bree is also a prisoner's pro se civil rights complaint, where the plaintiff claims that he required a 3,000 calorie per day diabetic diet and that the prison refused to give it to him.  The dietitian and a registered nurse have moved for summary judgment.  Judge Jeremy Fogel Explains:


Hartman and Bree contend that they did not act with deliberate indifference to Plaintiff’s medical needs, as the medical records show that Plaintiff’s diabetes was well-controlled on the diet he received and that his stage of hepatitis-C did not require aspecial diet. (Mot. at 6.) Essentially, Defendants argue that Plaintiff’s alleged dietary needs did not present a “serious medical need” warranting a special diet, or that the diet Plaintiff did receive created a substantial risk of serious harm.


Plaintiff has not shown that his medical condition required peanut butter crackers or other additional snacks, or that a failure to provide such snacks would result in substantial risk of serious harm.

He granted summary judgment for the moving defendants.
Posted by Unknown at 11:04 PM