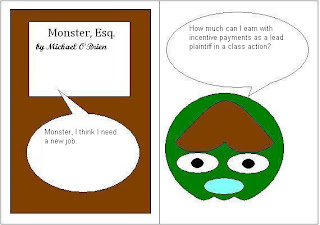 Two judges on the U.S. District Court for the Northern District of California recently released orders in class actions.

Arellano v. T-Mobile USA is a consumer class action claiming that the wireless carrier mislead consumers by stating it had an advanced Fourth Generation (4G) wireless network when, in fact, it didn't, in violation of 47 U.S.C. § 201(b).  Typically, § 201 cases deal with billing practices rather than advertising, but nevertheless, T-Mobile has not yet filed a motion to dismiss so it is not totally clear where this case will go.  You can read the complaint here.

There is no current matter pending before the court.  Nonetheless, Judge William H. Alsup produced a five page memorandum opinion about the factors considered for a potential class settlement. This is similar to the opinion on the interpretation of a class settlement have gave in the Charles Schwab Securities Litigation case. Here are some highlights:


Typically, defendants vigorously oppose class certification and/or argue for a narrow class. In settling, however, defendants often seek to expand the class, either geographically (i.e., nationwide) or claim-wise (including claims not in the complaint) or person-wise (e.g., multiple new categories). Such expansions will be viewed with suspicion.

To avoid collusive settlements, the Court prefers that all settlements avoid any agreement as to attorney’s fees and leave that to the judge.

If the proposed settlement by itself is not good enough for the named plaintiff, whyshould it be good enough for absent class members similarly situated? Class litigation proceeded well for many decades before the advent of requests for “incentive payments,” which too oftenare simply ways to make a collusive or poor settlement palatable to the named plaintiff. A request for an incentive payment is a red flag.

This blog has previously explained the difficulties in proving scienter in Securities Class Action cases.  Here, the case is decided on the scienter element.  Judge Illston's discussion is very good:

The plaintiff's do not allege either exception applies.  However, they do allege that Century's management had knowledge of the company's situation because they signed 10-Q and 10-K documents about the company's financial health.  However, this fails to amount to an inference of scienter. Glazer Capital Management, LP v. Magistri, (9th Cir. 2008).  Judge Illston granted the motion to dismiss without leave to amend.
Posted by Unknown at 12:25 AM