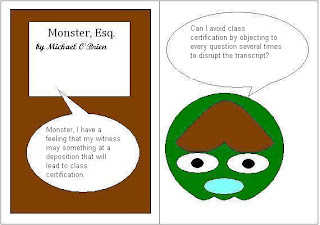 
This is a typical wage and hour dispute: the plaintiffs claim that their employer denied them breaks which means a denial of overtime pay which leads to false pay statements and amounts to seven causes of action under California and Federal labor laws.

This blog has previously discussed the procedure for class action certification.


The class action was an invention of equity [,] mothered by the practical necessity of providing a procedural device so that mere numbers would not disable large groups of individuals, united in interest, from enforcing their equitable rights nor grant them immunity from their equitable wrongs.

The theory has not moved far from its common law roots, today Federal Rule of Civil Procedure 23(a) provides:


In the first step, the court makes an initial determination whether conditionally tocertify the class for purposes of providing notice of the pending suit to potential members. In the second step, usually after the close of discovery, the defendant may move for decertification.

Gee is a typical wage and hour dispute brought by a group of mortgage writers at Suntrust who claim they were denied breaks and overtime pay. Suntrust argues that conditional class certification is inappropriate because the defense that the employees are exempt from FLSA can have widely different results depending on the individual mortgage leaders, title, field and location.  Judge Seeborg disagreed and granted the plaintiffs conditional class certification.

Temple is another typical wage and hour case where security guards claim that their employer did not compensate them for uniforms and break periods.  Plaintiffs argue that the defendant's policy prevented them from taking breaks.  Guardsmark responds and states that the claims are mostly idosyncratic to a single supervisor who, perhaps misunderstood the policies.  Accordingly, each employee would have to be individually asked about the terms of his or her employment causing the commonality requirement to fail.  Judge Susan Illston had some harsh words for the plaintiffs about their handling of the case:


Plaintiffs object to the admissibility of the 96 declarations submitted by defendant.Defendant first disclosed the identity of the 96 declarants as people with knowledge about the case ina supplemental disclosure filed November 4, 2010, the same day as defendant filed its motion to deny class certification and the accompanying declarations. Plaintiffs object that this was not “a timely”supplement, as required by Federal Rule of Civil Procedure 26(e)(1). They argue that it interfered withplaintiffs’ ability to conduct discovery, especially since defendant had refused to provide plaintiffs withthe identities of putative class members during discovery, and so there was no other way for plaintiffsto learn about these declarants.

Defendant replies by arguing, in essence, that class action litigation is always conducted this way. Defendant also argues that plaintiffs could have gotten the names of prospective class membersby agreeing to a compromise proposed by defendant, or by moving to compel production; that plaintiffsalso disclosed the identity of their declarants at the last moment; and that plaintiffs could have attemptedto conduct further discovery in the four months since the 96 names were disclosed, but that it has chosen not to.

Without condoning the method in which defendant conducted disclosure or discovery in anyway, the Court denies plaintiffs’ request to exclude the declarations. It does not appear that plaintiffswere harmed by the tardiness of the disclosure. [] The Court would have been more sympathetic to plaintiffs’ objection if, instead of merely objecting to the declarations two months afterthey were filed, plaintiff had attempted to depose the declarants to test their assertions, or if plaintiff hadworked more diligently to secure the names and contact information of a broader swath of potential class members.

Which is not to say that she was happy with the Defendant's council.


Plaintiffs argue that the reference to the “nature of the work” in the waivers means unequivocally that there is a security requirement that a security officer be “on post” at all times. [] For this proposition, plaintiffs cite the deposition testimony of Coley Buellesfeld. Althoughthe deposition transcripts in this case are exceptionally difficult to understand at times, due in no smallpart to the fact that defendant’s attorney objected at least once to almost every question that was asked during each deposition, it does seem that Buellesfeld in fact testified that some posts served by solo shiftworkers needed to be manned at all time, not that all or even most posts did. The portion of the Buellesfeld transcript cited by plaintiffs reads as follows:
Q. What are the security duties that are such that a meal period must be on duty?
MR. BERN: Objection. Overbroad, vague and ambiguous, calls for speculation.
BY MR. QUALLS:Q. You can answer.
MR. BERN: And outside the scope of the designated topics and outside the scopeof the litigation.
THE WITNESS: Repeat the question now.(Record read by the reporter)
THE WITNESS: It would depend – it would be – it would depend on the securityrequirements that – for example, that the post could not be – has to be manned at all times.It depends on the post. Everyone is – I mean not everyone, but many are different.

In the end the lack of discovery supporting commonality doomed the class certification and Judge Illston denied the motion.
Posted by Unknown at 2:27 PM