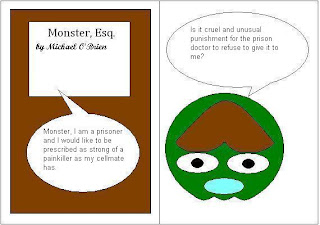 Several Northern District of California judges recently released rulings in cases brought under 42 U.S.C. § 1983.  Among them:

White v. San Francisco is a prisoner's claim for civil damages relating to the arrest related to his commitment offence. He has filed four motions for summary judgment, claiming that he was arrested without a warrant in violation of the Fourth Amendment.  Court documents show that the arrest warrant had three known aliases of Mr. White, but did not have his given name, however, the aliases were known to be that of Mr. White.  Additionally, a plaintiff cannot obtain civil damages for violations of his Fourth Amendment rights where he was, in fact, convicted.  See Heck v. Humphrey (U.S. 1994).  Judge Susan Illston granted summary judgment for the City.

Von Haar v. City of Mountain View is a police brutality action that this blog has discussed before.  On the previous motion to dismiss this blog was critical of Ms. Von Haar for failure to locate a factual basis for her Monell claim and a statutory basis for her state tort law claims.  This complaint is nominally better than the last one.  For instance it alleges that the police brutality is a violation of the Eighth Amendment (instead of the Fourth Amendment), but that can be easily remedied on amendment.  The Monell claim was much improved and used a failure to train theory.  The state law claim still fails, and Judge Lucy Koh is growing impatient:


The Court has already dismissed Plaintiff’s state law cause of action once. However, it remains possible that Plaintiff can cure the deficiencies in her complaint by identifying some statutory or common law cause of action, such as an intentional tort, that provides a state-law basis for liability.

Estrada v. Malo-Clines is a motion for reconsideration of the denial of a preliminary injunction in a prisoner's claim for inadequate medical treatment.  This blog has previously explained that a difference in opinion in treatment cannot be deliberate indifference to serious medical need.


Defendant’s medical notes report that Plaintiff repeatedly mentioned that his pain had responded most successfully with Tylenol-3, or codeine. The notes also indicate that, on April 27, 2010, and May 26, 2010, Defendant determined that Tylenol-3 was not currently necessary, and had discussed the matter with other medical professionals, who concurred with her assessment. Plaintiff also requested methadone or gabepatin because another inmate was receiving that medication for the same back problem. Although Plaintiff desires stronger pain medication, he is not entitled to medication of his choice. Moreover, the evidence submitted thus far does not tend to demonstrate that Defendant’s choice of treatment was medically unacceptable under the circumstances and that Defendant chose this course inconscious disregard of an excessive risk to Plaintiff’s health.

My emphasis, Judge Koh denied the motion for reconsideration.
Posted by Unknown at 4:00 PM