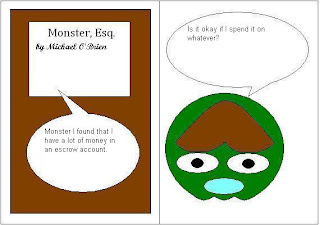 Here are some recent orders on summary judgment motions in the U.S. District Court for the Northern District of California.

Brantley v. Boyd is a typical mortgage dispute alleging violations of the Truth in Lending Act (TILA) and the Real Estate Settlement Procedures Act (RESPA).  The Brantleys took out a $180,000 loan from Praveen Chandra secured by their property in Union City, California.  They used this loan to "show some money on paper" so they could purchase a $2.1 million home.  The Brantleys never received the proceeds of the loan, didn't but the second property and sued for violations of TILA, RESPA, breach of fiduciary duty and conversion.  They now move for summary adjudication on a few claims.  Judge Samuel Conti was sympathetic to the plaintiffs:


Moreover, as the Court already determined in its November 19,2009 Order, there is no genuine issue that Academy failed to comply with the escrow instructions when it disbursed thefunds to Boyd. Nov. 19, 2009 Order at 13. Academy therefore breached its fiduciary duties to Plaintiffs. Plaintiffs have offered evidence that the disbursement to Boyd caused them injury. As a result of Academy's disbursement of the funds to Boyd, Plaintiffs were unable to repay the loan and were subjected to foreclosure proceedings.

Similarly, the conversion claim had merit:


Plaintiffs contend that, by distributing the escrow funds to Boyd, Academy wrongfully exercised control over the funds, depriving Plaintiffs of their right to possession and resulting in their injury. First MSJ at 21-22. The Court finds that the evidence supports Plaintiffs' claim and that no genuine issue of fact exists with regard to Academy's liability for conversion.

Judge Conti granted summary judgment for the plaintiffs on those claims.

Kroll v. Kaiser Foundation Health Plan is a typical ERISA case.  Cinda Kroll believes she is entitled to long term disability benefits and the Plan disagrees.  MetLife made the disability determination, which was contrary to the opinion of the Social Security Administration, while not dispositive, Judge Jeffery S. White felt this needed to be addressed.


MetLife contends that the record shows no objective medical evidence to supportrestrictions and limitations on Plaintiff’s ability to work. On the contrary, MetLife’s denial letter notes that Plaintiff’s medical records reflect that she had total left knee replacement surgery in September 2004, followed by complications of [deep venous thrombosis] in her lower left leg.

Lowy v. IRS is a request for documents under the Freedom of Information Act (FOIA).  The IRS sent Michael Lowy three letters essentially stating he was getting audited.  As Judge Susan Illston explains, Mr. Lowy asked for the following:


(1) all records documenting communications between the Australian Taxation Office ("ATO") and/orthe Australian Government, and the IRS which relate in any way to plaintiffs; (2) all records relating to (a) communications from the IRS to plaintiffs, (b) the United States Senate Permanent Subcommittee on Investigations' ("SPSI") inquiry into tax haven banks and United States tax compliance, in so far asthe records relate to plaintiffs, and (c) the request from the ATO to the IRS referred to in the IRS’s December 12, 2007 letter; (3) all records documenting communication between the IRS and the SPSI relating to plaintiffs; and (4) the names of all third parties that the IRS contacted in connection with their examination into the tax affairs of plaintiffs.

Sounds a touch paranoid right?  Well, Mr. Lowy was on to something since the IRS found over 12,000 pages of responsive documents, most were redacted leading to the current action.  He didn't get them, and wanted Judge Illston to compel their release, she was not willing to do that:

She denied summary judgment for both parties.

Travelers Property v. Centex Homes is an insurance defense dispute.  Travelers claims that it does not have to represent Centex in two construction defect suits in Sacramento County because Centex breached its duty to cooperated in the underlying actions.  Judge Charles R. Breyer agreed:


Defendant had a duty to cooperate under the policies.  Instead Defendant foreclosed Plaintiff's right to select counsel by (1) informing plaintiff that until all outstanding issues were resolved between them, Defendant would maintain control of its defense through Newmeyer & Dillion; (2) objecting to Plaintiff appointing new defense counsel; and (3) not authorizing Plaintiff's appointed counsel to take any action on its behalf.

He granted summary judgment for the plaintiff.

United States v. Undetermined Quantities of 57 Articles of Drugs is a civil forfeiture action.  Dr. James Forsythe claims that the drugs are lawfully his and not subject to forfeiture under Section 334 of the Federal Food, Drug and Cosmetic Act.  The labels of the drugs were in German which gives rise to the government's complaint.  Magistrate Donna M. Ryu explains:


In short, Plaintiff presents authority that each of the items are drugs within the meaning of the Act, that they were all manufactured at foreign facilities (and therefore travelled in interstate commerce) and that they were misbranded and/or unapproved. As to the last element, the United States points out that fifty-two were not labeled in English, which constitutes misbranding under 21 U.S.C. § 352(c) and 21 C.F.R. § 201.15(c)(1).

Mr. Forsythe makes the unique argument that destroying the drugs spoils evidence in another matter between the parties in Nevada.


Not only do many of the cases that Forsythe cites lack binding authority, but none of them help answer the question of whether evidence that is required to be destroyed by statute must be preserved when it is relevant to a separate proceeding between the same parties. It is beyond cavil that parties have a duty to preserve evidence that is relevant to an action in which they are named, but the issue in this case is whether that duty applies here and whether it trumps the FDCA’s requirement that misbranded drugs be destroyed.

She granted summary judgment for the government.
Posted by Unknown at 4:11 PM