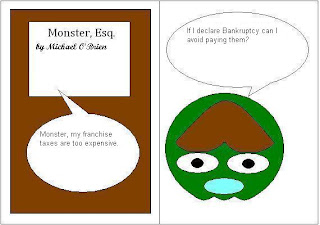 The Ninth Circuit has a Bankruptcy Appellate Panel that typically hears appeals from bankruptcy cases.  However, litigants and file an election to have the U.S. District Court hear the appeal.  These are relatively rare, but about twice a month someone does it.  Here are some of the recent decisions of the U.S. District Court for the Northern District of California sitting as an appellate court to the U.S. Bankruptcy Court.

Hawkins v. Franchise Tax Board is an appeal of the Bankruptcy Court's order refusing to discharge the debtor's tax liability.  William M. Hawkins, III founded the Electronic Arts video game company and entered into a couple of tax shelters that the IRS declared invalid.  The IRS and California's Franchise Tax Board (FTB) assessed $21 million and $15 million in taxes respectively against Mr. Hawkins.  The debtor contended that his income was substantially overshadowed by his liabilities and that he was unable to pay his tax bills.  The Bankruptcy Court disagreed:


The bankruptcy court concluded that Hawkins (1) knew he had substantial tax liabilities,(2) knew he was insolvent, and (3) thereafter continued to make unnecessary and unreasonable expenditures despite this knowledge of his finances.

Mr. Hawkins claims that the correct legal standard is that he has "fraudulent intent" rather than the 11th Circuit requirement of acting "knowingly and deliberately." Judge Jeffery S. White sided with the 11th Circuit and FTB:


Hawkins contends that Section 523(a)(1)(C) requires a showing of a "conscious effort toelude the tax by strategy or to intentionally frustrate the tax." (Appellant’s Br. at 13.) To theextent that Hawkins argues that Section 523(a)(1)(C) requires a showing of fraudulent intent ormalice, such a requirement is not supported by the plain language of the statute. See United States v. Ron Pair Enters., Inc. (U.S. 1989). Section 523(a)(1)(C) creates an exception from discharge for a tax debt where the debtor either "made a fraudulent return or willfully attempted in any manner to evade or defeat such tax" (emphasis added). As the bankruptcy court recognized below, the requirement under [United States v.] Jacobs [(11th Cir. 2007)] that the willful act oromission be voluntary, conscious and intentional “‘prevents the application of the exception[from discharge] to debtors who make inadvertent mistakes,’ but does not require thegovernment to establish fraudulent intent.” [T]he willfulness requirement under Section 523(a)(1)(C) is satisfied by the bankruptcy court’s determination that Hawkins voluntarily and intentionally violated his known duty to pay tax liabilities. The Court determines that the bankruptcy court applied the correct standard, as articulated in Jacobs, for willfulness under Section 523(a)(1)(C).

California Contractors State License Board v. Bertuccio involves a debtor who had his contractor's license revoked due to unpaid taxes.  He claimed that this was a violation of the automatic stay of collection activities and should be awarded damages.  The Board responded that Mr. Bertuccio failed to disclose several criminal convictions and likely would not have received his license in the first instance.  The Bankruptcy Court believed that both were correct.  The failure to reinstate the license was a violation of the automatic stay, but the failure to disclose the convictions gave the debtor "unclean hands" from which no sanction was appropriate.  Judge Lucy H. Koh Affirmed.


The Bankruptcy Court was also within its discretion to deny the remainder of the fees based on the unclean hands doctrine. Although hesitant to undercut the policy arguments in favor of remedying violations of the automatic stay provision, the Bankruptcy Court found that, in these "unusual circumstances," the equitable considerations outweighed any such policy concerns. See id. at *27. Here, Bertuccio knew he procured his contractor’s license by lying on the application, yet still sought recovery of such a fraudulently procured license. As the Bankruptcy Court noted, Bertuccio’s unclean hands "strike at the very heart of the basis for this adversary proceeding." See id. at *24. Bertuccio did not just misrepresent his criminal history on his license application, but he also misrepresented that criminal history all the way through four years of bankruptcy litigation, and was only exposed at trial in February 2008. In light of these egregious facts, the Bankruptcy Court’s decision denying the remainder of fees was not an abuse of discretion or erroneous application of law.

She affirmed the Bankruptcy Court's decision.

In Carpenters Pension Trust Fund for Northern California v. Moxley, the Fund argued that the debtor's withdrawal from the fund created a debt that cannot be discharged in bankruptcy.  The Bankruptcy Court disagreed and granted summary judgment for the debtor from which the Fund now appeals.  Judge Richard Seeborg explains the Fund's theory:


Under the Fund’s theory, Moxley serves in a fiduciary capacity with respect to the unpaid withdrawal liability and he has committed defalcation by failing to produce the money owed. [Making the debt non-dischargable under 11 U.S.C. §523(a)(4)].

Mr. Moxley responds by simply stating he is not a fiduciary for the Fund. That argument prevailed below:


The bankruptcy court concluded that Moxley did not commit any defalcation as “he merely failed to use his personal assets, to the extent he had any, and which he obviously did not hold in trust for the Fund, to pay his debt to the Fund." ER 510. Thus, in considering the question of whether Moxley's debt was dischargeable, the bankruptcy court considered the extent of Moxley's income as irrelevant. Instead, the bankruptcy court based its grant of summary judgment on a determination that Moxley was not a fiduciary of the Fund within the meaning of section 534(a)(4).

Judge Seeborg agreed with the Bankruptcy Court and affirmed the ruling.


In their motion, the Alegres contended that the RDA’s lease provisions gave rise to a nonresidential lease of the Wilbur property. They argued that, accordingly, MHCC was required to assume or reject the Wilbur lease within 120 days after its bankruptcy filing under Bankruptcy Code § 365(d)(4), which it had not done. As a result, the Alegres asserted that the lease should be deemed rejected, and that MHCC should be required to vacate the property. Alternatively, the Alegres contended that MHCC was not entitled to remain on the property without paying rent.

MHCC, on the other hand, argued that the Wilbur lease was residential because Clement and his family lived on the property. Because it was a residential lease, MHCC argued that it was not required to assume or reject the lease within 120 days under §365(d)(4).

The Alegres, much like Mr. Bertuccio above, prevailed in a Pyrrhic sense.


The majority of the bankruptcy courts that have considered the definition of "residential," have [held] that if people are living on the real property, it is residential in nature, despite the fact there may be a commercial purpose underlying the use[.] However, a minority of courts have held that although land is used for dwellings, it could be classified as nonresidential due to the commercial purpose of the lease.

Judge Hamilton went with the majority and found, contrary to the Bankruptcy Court, that the lease was residential because the Clements had lived on the property for over 20 years. Notably, this creates a conflict with In re Sonora Convalescent Hosp., Inc. (E.D. Cal. 1986) which found the opposite.

She affirmed the Bankruptcy Court's ruling on other grounds.
Posted by Unknown at 10:41 PM