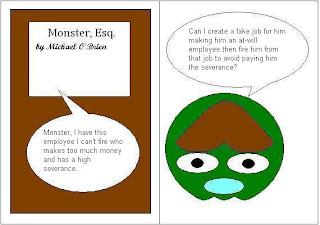 Judge Whyte explained that Mr. Buxom's evidence raised an issue for the jury:


Defendant correctly argues that nonperformance of a promise alone does not prove that arepresentation was false when made. See Church of Merciful Saviour v. Volunteers of America, Inc.,184 Cal.App.2d 851, 859-60 (1960) (proof of non-performance at most warrants an inference of an intention not to perform at time the representation was made). Here, however, plaintiff has not justoffered defendant's non-performance of its promise. In light of the circumstances surrounding the offer of the 2008 Agreement, the concerns Eagle Test had at the time, and the facts as testified to by plaintiff, a triable issue of fact exists with respect to plaintiff's claim that defendant offered to create the position of Vice-President of Fabless/Subcontractors for plaintiff in California with no intent to perform that promise.

He denied summary judgment setting the case for trial.
Posted by Unknown at 7:06 PM