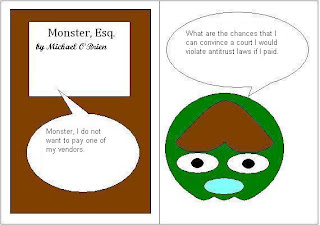 
Moreover, defendant only raised these issues as an affirmative defense and counterclaim after its own alleged breach of the contract. Suddenly, defendant’s good-Samaritan instincts have prompted these claims that, in reality, describe a competitive injury to plaintiff’s competitors and which elucidate no similar injury to defendant or to competition. Thus, the nature of defendant’s claims of injury are not rooted in an antitrust law-based injury-in-fact, but instead, if anything, present a harm grounded solely in contract law.

She also noted that even if Royal Canin had standing the claims would fail as a matter of fact.  She granted summary judgment on the antitrust defenses and counterclaims to Pet Food Express.
Posted by Unknown at 11:45 PM